So what: One of Enbridge Energy Partners biggest issues right now isn't with the company itself, but rather its publicly traded subsidiary Midcoast Energy Partners (NYSE: MEP). This company's largest assets are natural gas gathering systems in the Anadarko and Barnett shale formations and represent 90% of total EBITDA. An issue with owning gathering assets, though, is that they are much more susceptible to lower usage when production declines than larger traportiation pipelines and logistics services. If Midcoast were to have some contract protection against lower production values that would be less of an issue, but as of today only 11% of Midcoast's gross profits come from contracts with minimum volume commitments. 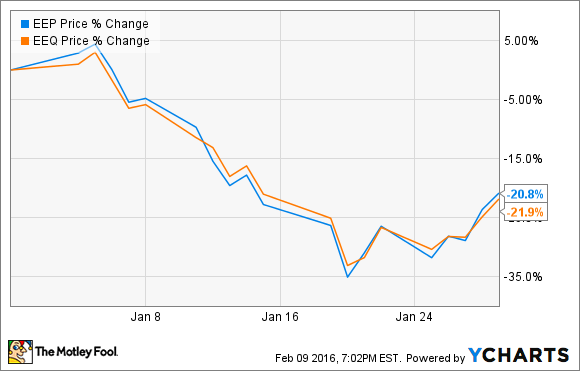 The reason this is an issue for Enbridge Energy Partners is that Enbridge owns a large stake in Midcoast, and it may need to drop down assets to Midcoast to help accommodate for the decline in natural gas gathering revenue. We saw something similar happen when Spectra Energy and Phillips 66 had to prop up their jointly owned MLP DCP Midstream with cash and pipeline assets that would provide long term stable cash flows. Unless we see some upticks in natural gas volumes across Midcoast's system, it's possible that Enbridge Energy Partners could be forced into a similar situation.

Now what: Investors seem to be pricing in some sort of troubles at Enbridge Energy Partners. At a distribution yield of 14.5% today, Enbridge can't use equity sales to funds its growth right now. While Midcoast Energy Partners appears to be in decent financial shape today, a drop in natural gas volumes in the system could put a hurt in the company's cash flow pretty quick. Based on these issues, it may be best to hold off from investing in Enbridge Energy Partners right now until we start to see some better results.