Please ensure Javascript is enabled for purposes of website accessibility
Log In Help Join The Motley Fool
Free Article Join Over 1 Million Premium Members And Get More In-Depth Stock Guidance and Research
By Adam Galas - Feb 11, 2016 at 8:05AM

Western Gas represents a highly undervalued high-yield MLP. However, there are two things investors need to be aware of before investing their hard-earned money.

As a value income investor, I absolutely love it when Wall Street freaks out and punishes all energy stocks en masse, as it has because of the worst oil crash in 50 years. Long-term income investors can find incredible values on many midstream MLPs that could result in stellar total returns over the next five to 10 years.

Take, for example, Western Gas Partners (WES 2.01%), and its general partner Western Gas Equity Partners (NYSE: WGP), both of which have been hammered worse than their competitors over the past year. 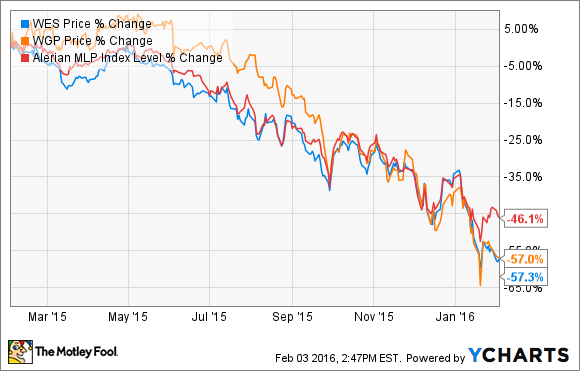 Yet with so many undervalued midstream choices out there, dividend investors can have a hard time deciding which ones represent the best long-term buys. To help determine if Western Gas Partners and Western Gas Equity Partners deserve a spot in your portfolio, here are the four most important factors you need to consider.

How undervalued are they?

Western Gas Partners is trading at a greater discount to its general partner, both on an absolute yield, price-to-operating cash flow, and a historical basis. Of course, yield is just one part of a distribution profile, the other two being payout sustainability and long-term growth prospects, both which are often more important than yield.

Is Western Gas Partners' valuation justified by its distribution profile? The answer is multifaceted.

Does the distribution profile justify the valuation?

Initially it appears as if Western Gas Partners' payout is sustainable. However, investors need to be aware that in the past two quarters, due to management's aggressive 15% year-over-year payout growth policy, its coverage ratio has been declining with Q2's and Q3's respective coverage ratios coming in at 1.24 and 1.05.

This is concerning for two reasons. First, it probably means that future distribution growth will have to be lower, which analyst forecasts clearly show. However, it also means the sustainability of the payout could potentially be threatened owing to the fact that 32% of the MLP's gas volumes have no minimum volume or revenue commitments.

Thus, should Western Gas Partners' largest customer, Anadarko Petroleum (APC) -- which also owns the vast majority of Western Gas Equity Partners -- be forced to pull back on gas production, the hit to the MLP's cash flow could result in an unsustainable distribution and even a potential distribution cut.

What are their respective growth potentials in a low energy world?
Another concern is that growth predictions may be overstated because of a highly limited drop down pipeline from Anadarko Petroleum, which has provided all of Western Gas Partners' growth up to now.

Of the 13 midstream assets Anadarko owned when it launched its MLPs, only three remain. 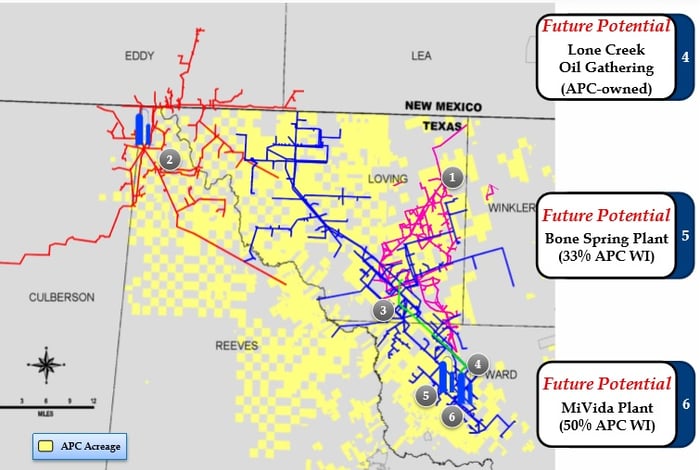 While future oil and gas production (as well as organic growth projects) may very well provide Western Gas Partners' with some additional growth in the future, this isn't likely to happen until energy prices recover.

Do they have strong balance sheets and good access to growth capital?

Two things I like about Western Gas is its solid balance sheet and a return on invested capital that's higher than its WACC (which allows it to invest profitably into future growth).

In addition, because both MLPs having relied mostly on equity markets for their growth funding up to now, the MLPs still have access to cheap debt to replace equity growth capital that is drying up. In fact, Western Gas current has $1 billion in available credit under its revolving credit facility, and thanks to its low leverage ratio, it is able to borrow all of it without risking breaching its debt covenants.

This means that the MLP likely has more than sufficient capital to finish acquiring the rest of Anadarko's midstream assets as well as funding organic growth projects. It also means Western Gas potentially has time for energy prices to recover while it continues growing cash flows in 2016 to secure its payout.