Not surprisingly, Realty Income surpassed analysts' and their own expectations for 2015.

Realty Income Corp. (NYSE: O) just reported its fourth-quarter and 2015 year-end results, and the company delivered solid and slightly better-than-expected results. Shares of Realty Income have been a bright spot in the market so far in 2016, up by more than 14% year to date while the S&P 500 is down by more than 10%. Here's what you need to know about Realty Income's latest earnings report, and what we can expect for 2016. 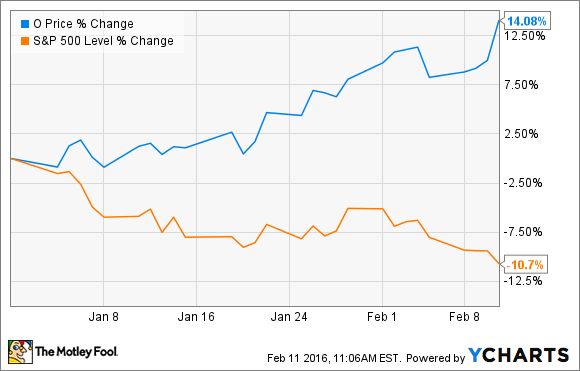 For the year, FFO per share increased by 7.4% over 2014's results, and AFFO -- adjusted funds from operations, the most accurate way of expressing REIT earnings -- increased by 6.6%. According to CEO John P. Case, this was a result of near-record volume of property acquisitions, favorable terms on capital raised, and strong occupancy.

Speaking of occupancy, one particularly impressive statistic is that Realty Income's occupancy rose slightly to 98.4% despite the most active year ever for lease expirations. While many types of retail are struggling, Realty Income's tenants are not, and the strong lease renewal is proof of this. 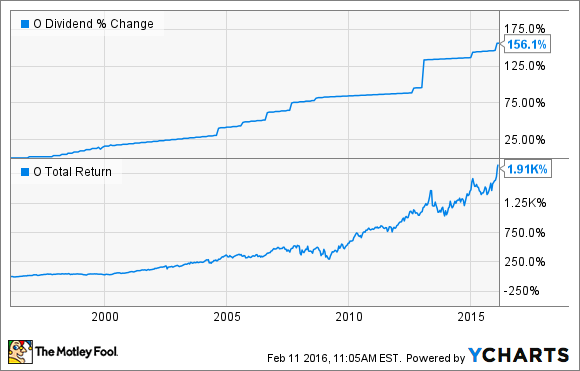 Most companies increase their dividends once per year, but as I mentioned, Realty Income adjusts its dividend quarterly. As a result, I expect several more increases during 2016 alone. In short, Realty Income has been, and continues to be, a dividend growth machine.

What Realty Income's portfolio looks like now
2015 was Realty Income's third most active year ever in terms of property acquisitions. The company invested $1.26 billion in 286 new properties, which are already 100% leased. Realty Income also sold 38 properties during the year for $65.8 million, pocketing a $22.2 million gain on these sales.

The end result is portfolio growth to 4,538 properties, 98.4% of which were occupied at the end of the year. Realty Income's economic occupancy -- that is, occupancy based on the portfolio's ability to generate rental revenue -- looks even better, at 99.2%.

What to expect in 2016
In its earnings release, Realty Income issued the following earnings guidance for 2016:

While these numbers represent pretty good growth, it's important to mention that Realty Income has a history of under-promising and over-delivering. As I mentioned earlier, at this time last year, Realty Income was projecting AFFO in the range of $2.66 to $2.71 per share, and the actual number was significantly above the high-end estimate. In 2014, FFO and AFFO were both at the high end of the guidance range, and in 2013, the FFO and AFFO of $2.41 beat the high end of both estimates.

With this in mind, I wouldn't be surprised to see another better-than-expected year in 2016, and the market would probably consider anything less a disappointment. This strong history of growth is one of the main reasons Realty Income has averaged a spectacular 17% average total return since its 1994 IPO, and I see no reason to believe this will change anytime soon.

Matthew Frankel owns shares of Realty Income.. The Motley Fool has no position in any of the stocks mentioned. Try any of our Foolish newsletter services free for 30 days. We Fools may not all hold the same opinions, but we all believe that considering a diverse range of insights makes us better investors. The Motley Fool has a disclosure policy.