The solar manufacturing plant that was supposed to change SolarCity's future is delayed, probably by two years or more.

Installing solar panels is what SolarCity does best, but it's having a harder time than expected making them. Image: SolarCity.

That's why when SolarCity (SCTY.DL) bought Silevo in 2014 many questioned the move, along with the $200+ million price tag for a company without a track record or a major production facility. Nearly two years after Silevo became part of the SolarCity family it may have become a headache SolarCity wishes it hadn't taken on.

Elon Musk's big promise gone wrong... again
When SolarCity bought Silevo it was supposed to be a big step forward for the company. The "simple, proprietary manufacturing process" could make solar cells that were 21% efficient, and projections were that 24% efficient cells were on the horizon (compared to 17%-18% for commodity panels).

In June 2014, Elon Musk said a 1 GW production facility would be up and running "within the next two years." If all went according to plan there could be many more GW scale production facilities built to meet the company's growing demand for solar panels. After manufacturing delays at the first plant and reductions in growth plans for SolarCity's core business, I don't think there's much appetite to build another Gigafactory.

During Tuesday's earnings conference call, management admitted that building equipment for the facility was taking far longer than they expected. Some equipment won't be ready until Q2 or Q3 2017, making it unlikely SolarCity will be building solar panels at scale until sometime in 2018.

Efficiency gains are being delayed
The big driver of SolarCity's desire to acquire Silevo stemmed from the increased efficiency it provided. You can see below that a rooftop solar system with more efficient panels can reduce the number of panels installed on each house. It could also increase the system size on a roof with the same number of panels. 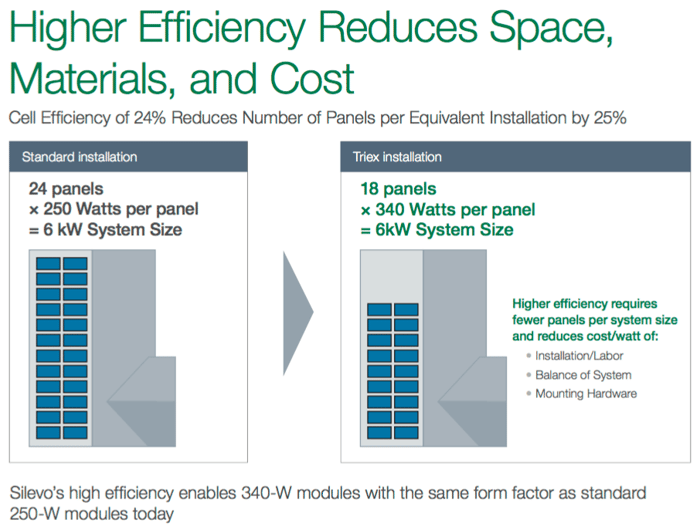 The announcement that SolarCity had hit a "world record" efficiency of 22.04% in October was met with cheers considering the production coming down the pipeline. But those panels may not reach mass production for two years, and that means more competitors will have time to catch up or pass SolarCity in the meantime. SunPower (SPWR -2.39%) announced only a month after SolarCity's record announcement that it was already mass producing panels that were 22% efficient. As it puts the finishing touches on a new production facility, it will soon pass 23% efficiency.

The big question for SolarCity
We think we know that SolarCity can build a solar panel that's as efficient as SunPower's and those of other industry leaders, even if the product is behind schedule. What we don't know is whether or not it's cost effective versus the competition. And that's a more important question than a percentage point or two of efficiency.

SunPower has been building solar cells for decades, and has painstakingly cut costs in the last few years alone to remain competitive with Chinese solar manufacturers. SolarCity has no experience making solar panels, is already delayed in its first manufacturing facility, and doesn't know its true manufacturing costs.

The good news is that the State of New York is subsidizing the facility to the tune of $750 million and leasing the facility to SolarCity for $1. Even with the free facility and the increased efficiency that's coming down the pipeline, building its own solar panels may be something SolarCity wishes it hadn't taken on at the end of the day.

Travis Hoium owns shares of SunPower. The Motley Fool owns shares of and recommends SolarCity. Try any of our Foolish newsletter services free for 30 days. We Fools may not all hold the same opinions, but we all believe that considering a diverse range of insights makes us better investors. The Motley Fool has a disclosure policy.