So much for Twitter reversing its decelerating user growth trend in Q4. But the company hopes the product changes it has planned will help.

Twitter's (TWTR -0.70%) fourth-quarter results this morning included both some better-than-expected and worse-than-expected figures. Of all the metrics shared in the update, the social network's pullback in core users seems to have stolen the show -- and not in a good way. Twitter shares are down about 5% following the report.

Here's a look at some of the key takeaways from the update.

Financial results
The social network continued to perform well financially. This has been the company's strong suit since it went public -- particularly when it comes to revenue growth.

Twitter's revenue for Q4 was $710 million, up 48% from the prior year and in line with what I was expecting. This revenue growth was driven primarily by $641 million in advertising revenue, which was up 48%, year over year.

Users
The company had 320 million total monthly active users. While this was a 9% increase from the year-ago quarter, it was flat sequentially, marking Twitter's worst sequential progress in users since it went public. And a closer look highlights an even bigger problem: Excluding the Twitter's low-value SMS Fast Followers -- users who access the service through text messaging primarily on feature phones -- Twitter's monthly active users actually declined from 307 million in Q3 to 305 million in Q4.

But management noted in their letter to shareholders that the platform is already seeing a reversal of that trend:

We saw a decline in monthly active usage in Q4, but we've already seen January monthly actives bounce back to Q3 levels. We're confident that, with disciplined execution, this growth trend will continue over time. 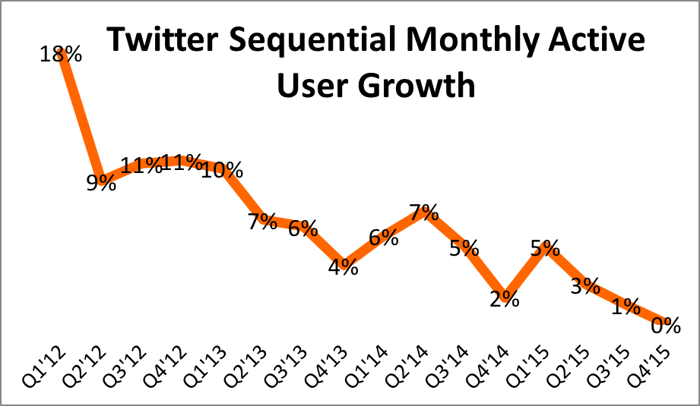 Other key takeaways
Here are some other key points from Twitter's quarterly update.

Going forward, management said in its shareholder letter that "that 2016 will be a year of many changes for Twitter," and noted the company has "a new product roadmap which includes significant changes."