What: Shares of regional telecom Centurylink (NYSE:CTL) rose as much as 12.9% on Thursday, following the release of a strong fourth-quarter report.

Looking ahead, Centurylink's management set the goal posts for fiscal year 2016 revenues around $17.7 billion. Adjusted full-year earnings should land near $2.60 per diluted share, and free cash flows are seen at roughly $1.9 billion.

By comparison, full-year revenues for fiscal year 2015 were $17.9 billion. Adjusted earnings added up to $2.71 per share, and free cash flows stopped at $2.7 billion.

Now what: Sales increased both in the consumer segment and in business-oriented operations. High-speed broadband connections led the way overall, along with strong adoption of the Centurylink Prism TV service.

However, outdated legacy services continue to hang around the company's neck like a concrete albatross. This is not unique, because the entire cable and telecom industries are dealing with similar issues. Investors still need to keep this legacy problem in mind before backing up the truck -- high growth may come in the far future -- but Centurylink (and friends) is stuck with this additional braking system for the foreseeable future.

And before getting too excited about Thursday's big jump, take another look at a longer-term chart. Centurylink shares are still lagging behind the overall market during the last five years, including a 27% plunge in the last year alone. One strong quarter doesn't change that unfortunate situation. 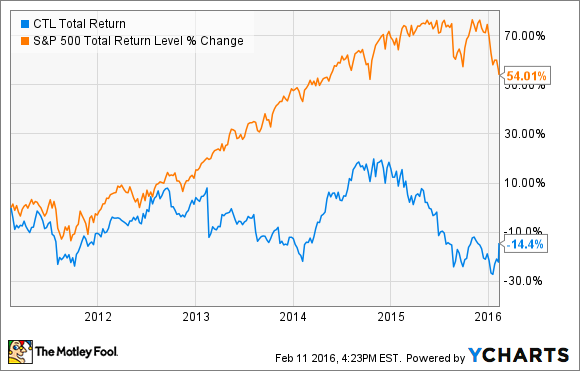