Public outcry over prescription drug expenses, a strong dollar, and a general pullback in the broader market have the SPDR S&P Pharmaceuticals index off more than 34% over the past six months. Although its industry has been sinking, Bristol-Myers Squibb (BMY -0.55%) stock has remained relatively buoyant. 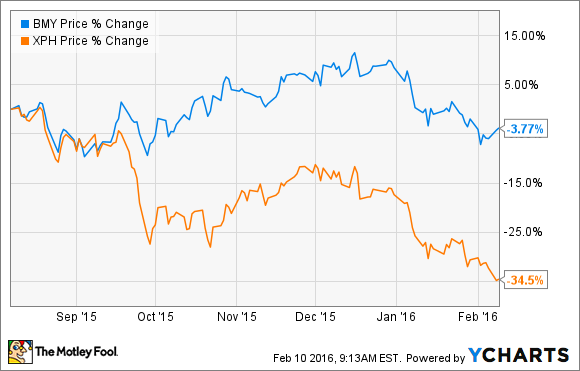 As one of the smaller pharmaceutical companies in the index, a few recently-launched drugs are making a big impact. Let's look at what's been repelling the bears and could help the stock rise in the quarters ahead.

1. Eliquis finally lifts off
After winning its first FDA approval in late 2012, next-generation blood thinner Eliquis didn't exactly burst out of the gates. Later expansion of its label to reduce clots following hip or knee replacement and for the treatment of thrombosis and embolism helped it take a huge leap forward. Last year, sales of the oral anticoagulant jumped 140% to $1.86 billion.

Eliquis isn't the only new oral anticoagulant out there, but it's on its way to becoming the top seller. Competition from Johnson & Johnson's Xarelto has been fierce, but the market leader is barely a step ahead with $1.87 billion in sales last year. If both maintain their current trajectory, Eliquis will overtake Xarelto in the first quarter of 2016.

Eliquis' success is far more important to Bristol-Myers than Xarelto's is to the megaconglomerate. Eliquis sales comprised 11% of Bristol's total revenue last year.  Another big year for the anticoagulant would significantly improve Bristol's top line and likely help nudge its share price upwards as well.

2. Rapid Opdivo expansion
Another potential blockbuster poised to move the needle for Bristol is its immuno-oncology star, Opdivo, a drug that blocks the PD-1 pathway that tumors exploit to hide from the immune system. Its main competitor in the anti-PD1 space, Keytruda from Merck & Co., had a strong lead to begin 2015. By the end of the year ,that lead evaporated -- fourth quarter Opdivo sales of $475 million more than doubled those of Keytruda.

A large part of Opdivo's acceleration has been a string of important label expansions, the most notable of which is in lung cancer. While Keytruda is indicated for some lung cancer patients, it is limited to those with tumors that express high levels of PD-L1 -- a part of the blocked pathway. This means oncologists must perform an FDA-approved genetic test in order to prescribe it. Opdivo isn't hindered by this complicated diagnostic restriction.

The label continues to expand at a mind-boggling rate. Late last year the FDA approved Opdivo for treatment of advanced kidney cancer and another genetically defined group of advanced melanoma patients. More recently, the the agency approved another label expansion for Opdivo in combination with Bristol's first immuno-oncology drug, Yervoy, for treatment of certain melanoma patients.

Coming soon could be another expansion into advanced head-and-neck cancer. Earlier this year Opdivo proved so effective at prolonging survival in a phase 3 trial that data monitors suggested quitting early. Bristol hasn't announced the filing of an application yet, but I wouldn't be surprised if head-and-neck cancer patients become eligible for Opdivo treatment before the end of the year.

As these recent label expansions and additional filings in the years ahead propel Opdivo toward its peak annual sales estimate of $13 billion, the stock should rise as well.

3. Another immuno-oncology first
Opdivo wasn't the only cancer therapy Bristol-Myers won approval for late last year. Empliciti is a first-in-class immunostimulator that coaxes patients' own natural killer cells into attacking multiple myeloma cells. Developed in partnership with AbbVie (ABBV -0.11%), it's approved for treatment in combination with Celgene's Revlimid and dexamethasone.

During a trial that led to its approval, adding Empliciti to the standard Revlimid/dexamethasone combination slowed disease progression by 30%. Also eliciting "oohs" and "aahs" from oncologists was a nearly 20% increase in the percentage of patients responding to the three-drug combo.

Although AbbVie collaborated in the development of Empliciti, Bristol-Myers is solely responsible for its commercialization. In return, Bristol will receive 70% of U.S. profits, with the remaining 30% going to AbbVie. For sales generated outside the U.S., AbbVie will receive an undisclosed royalty.

With a bit of luck, Empliciti could become a blockbuster for Bristol-Myers and AbbVie. It has some big hurdles to cross, and its list price of about $10,000 per month could weigh it down. For patients that have received three lines of treatment, it will compete with Johnson & Johnson's recently-approved Darzalex. With a list price of about $135,550 for a first full year of treatment, Darzalex isn't cheap, but it doesn't need to be combined with $14,000 per month of Revlimid.

Roughly 30,000 new cases of multiple myeloma are expected to be diagnosed in the U.S. this year. Just how many will progress after their first therapy and become eligible for an Empliciti regimen is just one unknown. Add in competition from Celgene's Pomalyst, Amgen's Kyprolis, and Takeda's Velcade, and Empliciti's future becomes cloudier still.

While it has potential to significantly boost Bristol's earnings, and in turn its share price, I wouldn't pin hopes of a Bristol-Myers stock rally on Empliciti alone. Luckily, it's not the only recently approved drug poised to drive the company's growth in the years ahead.