It wasn't a great end to 2015 for Group 1 Automotive, but the good news for investors is that the company's financials should rebound in 2016.

It was the best of times, it was the worst of times. It was the age of record U.S. automotive sales in 2015, it was the age of "peak auto" sales doom and gloom. Thanks to the latter portion of the previous sentence the market has absolutely crushed automotive stocks over the past couple of months. Despite record profits, major manufacturers such as Ford and GM have been sold off. Even dealership groups, third-party online websites and parts suppliers have been sold off.

With all of that said, it shouldn't surprise investors to hear that shares of Group 1 Automotive (GPI 1.75%), a primarily U.S. based dealership group, was trading more than 10% lower after reporting its fourth-quarter results this week, but was the company's results really that bad? Let's dig in.

Fourth-quarter
Group 1 posted revenue growth of 5.3% to $2.67 billion during the fourth-quarter, which was in line or slightly above most estimates. Its total gross profit grew nearly 4% to $380.1 million but the company reported a net income loss of $33.4 million compared to the prior year's $18.7 million profit. However, most of the blame is due to non-cash asset impairment charges of $85.6 million, and when adjusting for that and other special items, Group 1's Adjusted-EBITDA checked in at $83.7 million -- which was still a decline from the prior year's $89.9 million.

Group 1's adjusted-earnings per share for the fourth-quarter was $1.51, a 9.6% decline from the prior year and far short of estimates that called for $1.78 per-share. It wasn't a great fourth-quarter, but thanks to a good start to the year Group 1 still managed to end the full year with adjusted-EBITDA growth from $335.6 million during 2014, to $368.5 million for full-year 2015.

The question remains: With U.S. automotive sales still red-hot during the fourth-quarter, what happened to Group 1?

It's that dang oil, sort of
For Detroit manufacturers like Ford and General Motors, which generate a vast majority of their profits from selling SUVs and trucks, oil equals cheap gas prices which equals higher sales for its most profitable products. Unfortunately, that positive effect isn't felt in full force for a dealership group such as Group 1 because it has more brands, such as European luxury brands and Japanese autos known for passenger cars, that don't focus on selling SUVs as much as Detroit autos. Further, one glance at this next graph and the driving force behind Group 1's pain amid low oil prices becomes much more clear. 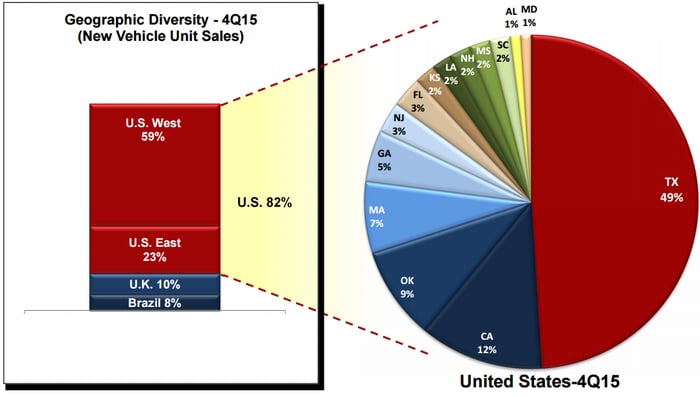 The decline in oil and gas prices have negatively affected the economies of Group 1's prime markets in Houston, Oklahoma, and Texas in general which, as you can see above, is a huge chunk of the company's sales. If you know anybody working in the oil industry, you can understand why individuals and companies are hesitant to buy new vehicles with such a downturn in oil prices, jobs and drilling activity in general.

Silver lining for investors?
The good news for investors is that despite a rough go for many of its major markets, Group 1 has proven it can consistently grow its business over time. 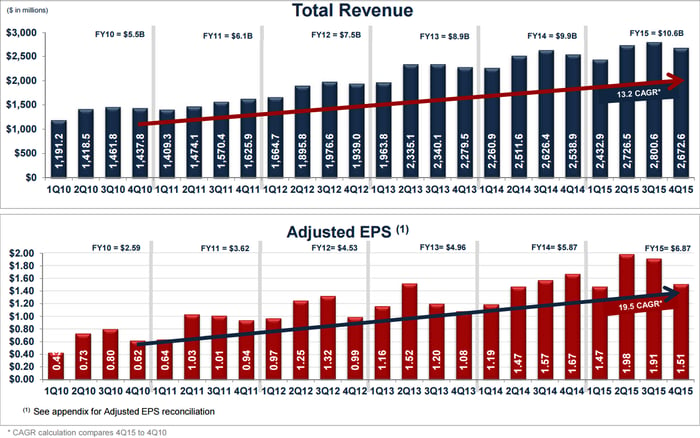 Also, in an attempt to return more value to shareholders, the company's board of directors increased the share repurchase authorization from $78.2 million to $150 million. Ultimately, 2016 results should rebound for Group 1 as it will focus on putting the correct vehicle mix on its dealership lots to reflect the surge in SUV sales, and it will lean out its over-supply of vehicles that has put pressure on its margins.

Most importantly, though, will be what happens to the price of oil and how it impacts Group 1's major markets where the economy depends on an improving and growing oil and gas industry. If there's a rebound in oil prices and those markets, Group 1 should be able to increase its revenue right along with its major Texas and Oklahoma markets.