JPMorgan Chase & Co. CEO Jamie Dimon buys 500,000 shares of the bank in the open market. For patient, value-conscious investors, that's a signal worth listening to.

JPMorgan Chase & Co. CEO Jamie Dimon purchased 500,000 shares of his bank's shares on Thursday. Image source: Based on an original image by Steve Jurvetson, republished under CC BY 2.0.

This column has focused on the banking sector this week, because that's where I see the most obvious opportunities at this time. On Tuesday, when I wrote that for high-quality bargains, investors should look at financials, I specifically highlighted two stocks: Bank of America Corp and JPMorgan Chase. The shares continued to fall, culminating in sharp losses yesterday, with B of A down 6.8% yesterday, while JPM fell 4.4%.

Yesterday, however, an insider stepped in to buy half a million shares of JPMorgan, worth $26.5 million at yesterday's closing price, signaling that he believes shares are undervalued. That shareholder is what you might call an informed buyer: Jamie Dimon, the bank's chairman and CEO.

A different, more cynical interpretation is possible: Dimon is simply trying to boost the market's confidence in the shares, without consideration for whether or not they offer good value.

After all, according to data from Bloomberg, he already owned 6.2 million shares, so adding another half million is a relatively cheap way of trying to boost the price through signaling. In fact, based on today's 7.59% pop in the shares (as of 12:52 p.m. ET), Dimon's original holding just gained $24.5 million in value. On that basis, the purchase has essentially paid for itself.

However, that doesn't strike me as consistent with his character. Furthermore, there is no reason he can't be buying the shares because he wants to raise the market's confidence and because he thinks they're a bargain. As CLSA bank analyst Mike Mayo told the Wall Street Journal:

Jamie Dimon stepped up to the plate; it's a big number. [The recent market decline is] either a financial catastrophe, or this is an epic buying opportunity, and Dimon is in position to know what outcome is more likely.

On July 19 to 20 in 2012, he bought 1 million shares at an average price of $34.22. This is how the shares have performed, on a total return basis, since then (JPM shares are in blue, and the red line is the Vanguard Financials ETF): 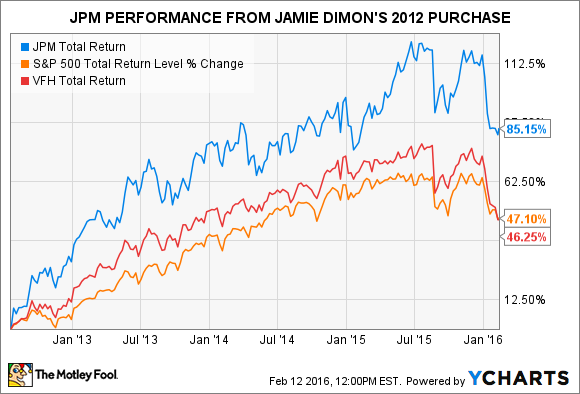 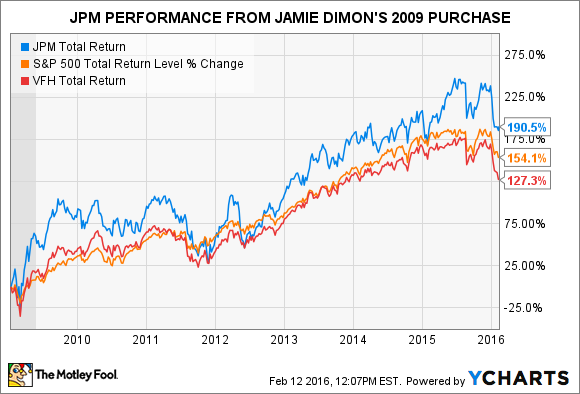 Of course, you might reason that now this information is public, it's embedded in the price, resulting in today's pop, and there is no longer any way to make money in the shares. For momentum traders and other participants who confine themselves to short holding periods, that's likely to be true. For patient investors who can afford to hold the shares for at least three to five years and beyond, this Fool feels confident JPMorgan's shares continue to offer good value.

Alex Dumortier, CFA has no position in any stocks mentioned. The Motley Fool recommends Bank of America. Try any of our Foolish newsletter services free for 30 days. We Fools may not all hold the same opinions, but we all believe that considering a diverse range of insights makes us better investors. The Motley Fool has a disclosure policy.