The U.S. hasn't experienced deflation since the 1930s. Let's hope that continues.

Last month, the Federal Reserve announced that its annual stress tests on the largest U.S. banks would include a scenario of declining prices and wages in the economy, or deflation.

Deflation is a scary proposition for central bankers and investors alike, and the fact that the Fed is including it in this year's stress tests is both reassuring that the tests will be so thorough, but it's also a scary omen that Janet Yellen and Co. think deflation could be on the horizon.

Why is deflation so scary?
The exact mechanisms of deflation are not fully understood, and modern economists still argue as to whether deflation is a cause of economic strife or merely a symptom of it. In either case, deflation has a strong association with very challenging economic times.

Theoretically, deflation is caused by either a decline in prices driven by lower demand, by sudden increases in the money supply, or by technological advances that lower production costs. When prices decline, commodity businesses suffer because the price of the goods they sell declines, crimping profits. Deflation causes businesses of all types to pay higher real wages for their workforce, forcing management to cut salaries or lay off workers to offset the decline in pricing power. Borrowers also suffer, as the amount they must repay becomes higher in inflation adjusted terms than they originally anticipated when they borrowed the loan.

Deflation driven by technological advancement is a more hotly debated topic, and can be viewed as a positive phenomenon for consumers and businesses thanks to lower prices coupled with higher productivity.

Regardless of whether it's a cause or an effect, deflationary environments tend to correlate with high unemployment, wage decline, and increased credit risk in the financial market. That's a recipe for economic trouble every single time.

Bank stocks in the cross hairs already
For the banks in this year's stress tests, the risk of deflation is already evident. Commodity price declines, led by the price of oil dropping 70% over the past 18 months, are putting pressure on regional economies with a heavy reliance on oil, gas, or mining. Banks like Cullen/Frost Bankers and Comerica have led the markets lower, declining three times more than the S&P 500 and twice the industry specific KBW Bank Stock Index over the last 18 months. Cullen/Frost saw its revenue increase 5.8% year over year for 2015, but its net income increased just 0.6%. The results at Comerica were worse, with revenues increasing 8.6% and net income actually declining 9.8%. Trouble in the oil and gas portfolio are driving up costs, more than offsetting revenue growth. 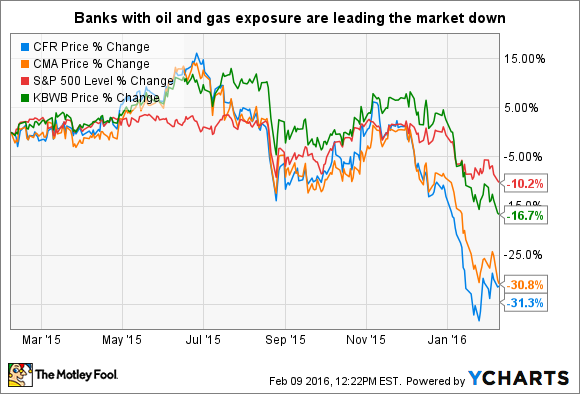 If deflation were to significantly take hold, the declines in wage growth and increase in credit risk could send even the largest and soundest banks lower, regardless of exposure to the oil and gas industry. Banks like Bank of America and Wells Fargo rely on the American consumer to borrow money for mortgages, hold their cash in deposit accounts, and spend their money with debit and credit cards provided by the banks. A deflationary environment discourages all these behaviors, which could prompt declines across each of these bank's business lines, sending their stock lower.

History has shown that it's not just bank stocks at risk
Throughout U.S. economic history, deflationary periods have aligned with some of the most disruptive and painful financial times for businesses and individuals, from the relatively mild "lost decade" in 1990s Japan to much more severe examples like the Great Depression of the 1930s and the Long Depression in the second half of the 19th century.

The Great Depression was the last significant deflationary period in U.S. history. Prices declined 10% per year from 1930 to 1933, driven by a shrinking money supply resulting from the massive scale of bank failures across the country as the depression spread. Of the U.S. banks open for business in 1929, half ceased to exist by 1933. The unemployment rate peaked well above 20%, and the stock market fell 89% before it bottomed. It would take over 30 years for the market to recover to its previous highs before the 1929 crash. 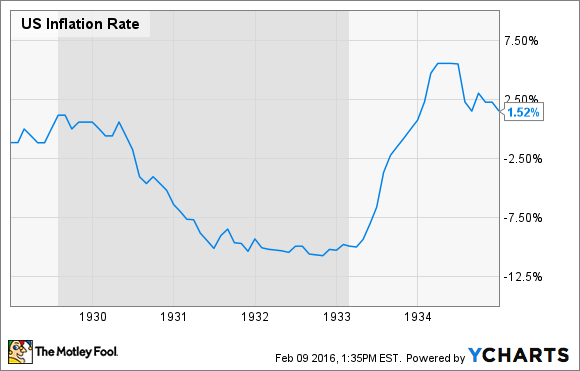 Before the Great Depression, the U.S. experienced a prolong period of deflation stretching from the Civil War to the turn of the 20th century. The deflation during this period from 1865 to 1900 was driven by tanking commodity prices, more similar to today's rapid decline in oil prices than to a rash of bank failures as witnessed in 1930-1933. The deflation was so severe over this time that some economists estimate that prices in 1800 were upwards of 50% lower than what they were 100 years later in 1900.

The deflation experienced in the Long Depression caused wages to decline, limiting any buying power benefit works could have experienced from the lower prices for goods and services. The steep declines in key commodity prices were a crushing burden for the small farmers and manufacturers that defined the U.S. economy at the time, along with the burgeoning industrial giants coming into their own at the same time. Grain prices fell by two-thirds from 1867 to 1894, cotton fell by over 50% from 1872 to 1877, and the price of iron halved between the 1870s and 1890s, a period of time when iron production more than doubled. The carnage wouldn't stop until 18,000 businesses went under, hundreds of banks failed, and 89 railroads and 10 U.S. states went bankrupt.

Deflation is a scary proposition, but the Fed is taking preventative measures
The most severe scenario to be used in this year's stress tests includes a scenario with moderate deflation, a sharp increase in credit risk, and significant illiquidity in markets where banks borrow to fund their operations. It is, in essence, the same scenario economists associate with historical deflationary periods.

It's important for investors to remember that this scenario is just a projection of the worst case scenario. The Fed is not saying that it expects this to happen. Instead, and for the first time in modern U.S. history, the Fed is forcing banks to contemplate and plan for drastic unforeseen economic problems like deflation.

Had these preventative measures been in place in 1873, 1929, or 2008, it's not far-fetched to think that the resulting economic chaos could have been mitigated. A prolonged period of deflation may be the Fed's worst nightmare, and it could cause major damage to the markets and economy. But at least regulators and banks today will be as prepared for it as they can be, a major advantage compared with deflationary periods of the past.