Please ensure Javascript is enabled for purposes of website accessibility
Log In Help Join The Motley Fool
Free Article Join Over 1 Million Premium Members And Get More In-Depth Stock Guidance and Research
By Rich Duprey – Feb 12, 2016 at 11:07AM

Winning back the trust of consumers who fled isn't an easy task, but there is reason to believe the Mexican restaurant can succeed.

Chipotle Mexican Grill closed its doors for a few hours on Monday as it regrouped for a new marketing push to win back customers. Image source: Daniel Kline.

Chipotle Mexican Grill (CMG -2.63%) has a problem, and it knows it. All 2,010 Chipotle restaurants closed for lunch on Monday as executives updated its employees on food safety procedures being initiated in the wake of the foodborne illness outbreaks of E. coli and norovirus across the country that sickened dozens of customers and crippled the chain's operations.

The problem is its customers have fled the chain. Fourth-quarter revenue dropped 7% as comparable-restaurant sales tumbled almost 15%, and it previously reported they plummeted 30% in December alone after new outbreaks were reported. It got no better in January, as comps fell 36%, though it was also up against tougher comparisons from last year and severe winter weather. It's hoping this month will improve, but only because it's an easier comparison to 2015's results.

But If Chipotle's customers are fleeing the Mexican food chain, where are they going?

McDonald's (MCD -1.56%) has been trying to woo back customers it lost to fast-casual restaurants. Despite the burger joint's efforts at improving its food's quality, and even though it enjoyed a better-than-5% increase in comps last quarter, it's hard to believe millennials are really so fickle that they'd swap Chipotle's burritos and rice bowls for a Big Mac.

Similarly, Taco Bell saw comps rise 4% in the quarter, but substituting the fast-food menu of the Yum! Brands chain doesn't seem likely, either, as customers have largely flocked to Chipotle because of its fresher, more wholesome ingredients.

Some analysts have suggested Brinker International's (EAT -2.54%) Tex-Mex chain Chili's would be a beneficiary, but the 6.2% gain in revenue Brinker saw in the latest period was almost wholly the result of an acquisition it made. Chili's company-owned comparable-restaurant sales actually fell almost 3% while U.S. franchised restaurants were down 0.1%.

Others have suggested Del Taco, Moe's Southwest Grill, and Jack in the Box's Qdoba will gain sales. Del Taco reported last month it did see a 6% gain in comps in its fiscal 2015 fourth quarter while Qdoba's were up almost 10% for its fiscal year, though that was before the worst of the trouble hit Chipotle. 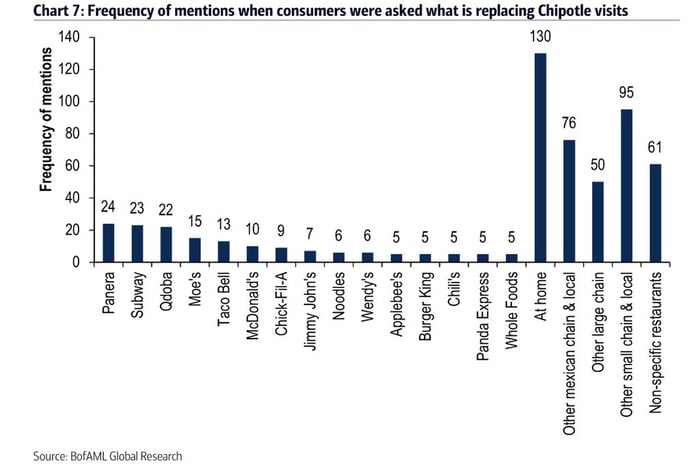 According to a Bank of America Merrill Lynch survey, though, it looks like Panera Bread (PNRA) stands to gain the most of anyone. When asked which restaurant they'd visit if they were swearing off Chipotle, the fast-casual sandwich chain garnered the most mentions. Subway was a surprise runner-up.

But the real winner could be supermarkets. Far and away more people said they would just eat at home instead of dining out, which actually bodes well for Chipotle Mexican Grill. If it's not losing very many customers to the competition, then it may mean they are just waiting for the all-clear sign to be given before they return.

The Centers for Disease Control & Prevention did recently conclude its investigations into the outbreaks, though it was unable to determine their source. But with Chipotle now launching a massive marketing effort to win customers back, the collapse in comps could be a relatively short-lived affair.

Investors may still want to wait before biting into the burrito maker. A federal criminal probe into the outbreaks just went national and is expanding to cover the last three years of Chipotle's operations. There's no knowing what that may turn up, a wild card that even curing the current malaise can't erase.

Rich Duprey has no position in any stocks mentioned. The Motley Fool owns shares of and recommends Chipotle Mexican Grill and Panera Bread. The Motley Fool recommends Bank of America. Try any of our Foolish newsletter services free for 30 days. We Fools may not all hold the same opinions, but we all believe that considering a diverse range of insights makes us better investors. The Motley Fool has a disclosure policy.