The once-iconic retailer is being annihilated by the competition. 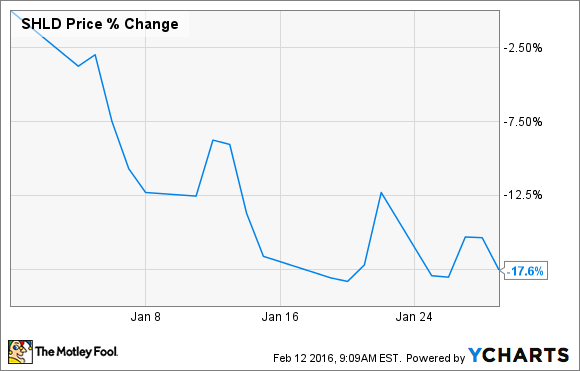 What: Shares of Sears Holdings (SHLDQ) fell 17.6% last month, according to data provided by S&P Global Market Intelligence. The retail giant is accelerating its store closures in a desperate attempt to remain viable.

So what: Sears has seen its business decimated by an onslaught of competition. E-commerce juggernaut Amazon.com is a merciless rival, offering shoppers a value proposition -- based on a larger selection of goods, lower prices, and more convenient shopping experience -- that Sears simply can't match.

In addition, Sears-owned Kmart, which competes mostly on the basis of price, finds itself in an unwinnable battle with low-cost titan Wal-Mart. The retail king's massive scale, best-in-class distribution system, and hefty clout with its suppliers allows Wal-Mart to profitably offer goods at low price points -- something Kmart was once known for but has struggled to do consistently in recent years.

Throw in intense competition from the likes of dollar stores, home-improvement retailers, and electronics chains and Sears is simply being overwhelmed and outmatched.

Now what: Unfortunately for Sears -- and its shareholders -- this competition is only likely to intensify in the years ahead.With losses piling up and its cash reserves dwindling, Sears Holdings may be nearing its end.

Joe Tenebruso has no position in any stocks mentioned. The Motley Fool owns shares of and recommends Amazon.com. We Fools may not all hold the same opinions, but we all believe that considering a diverse range of insights makes us better investors. The Motley Fool has a disclosure policy.