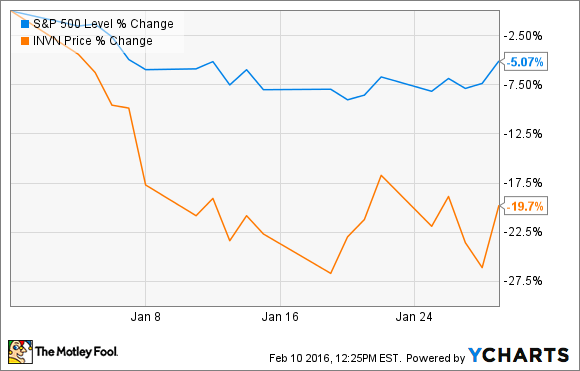 So what: Many Apple suppliers were pummeled last month as news surfaced that demand for iPhones is slowing. NXP Semiconductors and Skyworks Solutions were hit hard with the news as well, but InvenSense's exposure to Apple, and the overall smartphone market, makes the news particularly troubling.

InvenSense says that its largest customer accounts for 34% of its total revenue, which most likely refers to sales of motion sensors to Apple. But the company could see that revenue stream contract as iPhone sales are expected to slow down in Apple's fiscal Q2 2016. That understandably spooked InvenSense investors last month, but it wasn't the only bad news.

InvenSense CEO Behrooz Abdi said at the end of January that the company's second largest revenue contributor (most likely Samsung) will fall to a single-digit percentage. The drop is significant because Samsung recently contributed about 19% of InvenSense's total revenue.

When pressed by analysts on the company's earnings call about InvenSense's position with Samsung, Abdi alluded to the fact that InvenSense's 6-axis motion sensor won't be in Samsung's upcoming Galaxy S7 device.

Now what: What makes matters worse for InvenSense is that the bad news in January will likely stick around for quite a while. If Apple's iPhone slowdown proceeds longer than a quarter or two, then it could significantly weigh down InvenSense's revenue.

Additionally, Samsung moving away, or at least taking some business away, from InvenSense's motion sensors in Galaxy S lineup leaves it to rely on its optical image sensor business and fledgling Internet of Things segment for growth.

InvenSense has relied on both Apple and Samsung to drive its business forward for too long, and now it may have to vigorously pursue its other segments out of sheer necessity.