Please ensure Javascript is enabled for purposes of website accessibility
Log In Help Join The Motley Fool
Free Article Join Over 1 Million Premium Members And Get More In-Depth Stock Guidance and Research
By Chris Neiger – Feb 14, 2016 at 7:14AM

Fears of an iPhone slowdown and increasing competition from Qualcomm spurred an investor sell-off. 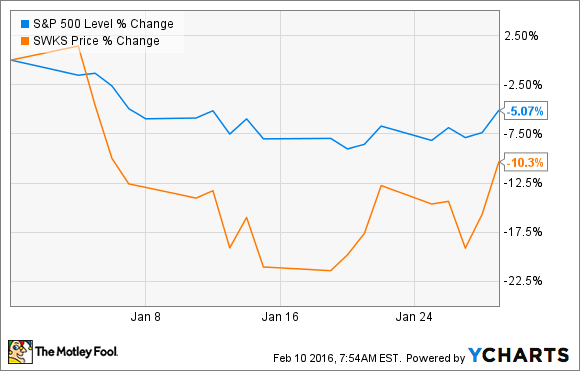 What: Last month, shares of Skyworks Solutions (NASDAQ: SWKS) fell 10.3%, according to S&P Global Market Intelligence data. Investors were influenced by early rumors that Apple (NASDAQ: AAPL) would cut production of its iPhones, as well as a growing fear that Qualcomm (NASDAQ: QCOM) is becoming a stronger competitor in the radio frequency chip market.

So what: Skyworks' radio frequency (RF) power amplifiers are used in the current iPhone 6s lineup and the company makes between 35% and 40% of its revenue from Apple, according to estimates from Oppenheimer & Co. analyst Richard Schafer. So any negative change in iPhone demand weighs pretty heavily on the company.

But Apple's iPhone slowdown wasn't the only thing that caused Skyworks' slide. Rival Qualcomm formed a joint venture with Japan-based TDK Corp. in January to create their own radio frequency chips.

That could eventually add some serious competition to Skyworks' RF chips, but it'll take a while for the joint venture to have an impact on Skyworks. But the long-term potential threat was enough to spur a sell-off for some investors.

Now what: Apple said it will see negative iPhone growth in the coming fiscal Q2. But as Skyworks' stock has already fallen on the slowing iPhone demand rumors, shares shouldn't fall on any more on that news.

And going forward, Skyworks stock could actually rebound on future iPhone news. Anticipation is growing for the rumored iPhone 7, likely to debut this September, and Skyworks' tech will probably have a spot in the device.

Skyworks investors will need to keep watching what the new Qualcomm and TDK Corp. partnership brings. Once production ramps up, Qualcomm's new endeavor could steal away some of Skyworks' RF business, though the joint venture won't likely hurt Skyworks' RF business in the short term.

Chris Neiger has no position in any stocks mentioned. The Motley Fool owns shares of and recommends Apple, Qualcomm, and Skyworks Solutions. Try any of our Foolish newsletter services free for 30 days. We Fools may not all hold the same opinions, but we all believe that considering a diverse range of insights makes us better investors. The Motley Fool has a disclosure policy.