As Facebook takes its enterprise social networking tool public, I look at which major enterprise tech companies its launch threatens the most. 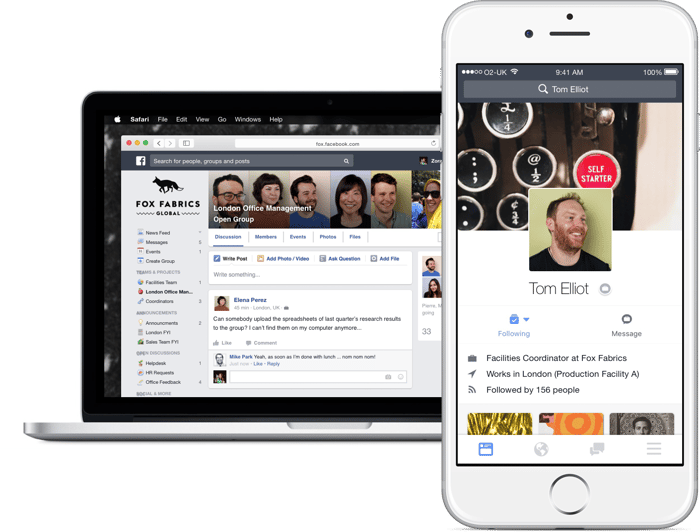 Though investors are more likely to think of its soaring stock price or surging financials when Facebook (META 5.03%) is mentioned, the world's largest social network is also proving to be Machiavellian in its approach to competitors.

The social blogging platform Twitter and vanishing video unicorn Snapchat are just a few of the companies that have come within its crosshairs. And Facebook is now shifting its scorched earth campaign to the enterprise side of tech with the recent launch of Facebook at Work.

Although it's still early, companies ranging from LinkedIn (LNKD.DL) to red-hot enterprise messaging platform Slack, and even Microsoft (MSFT 1.63%), should take notice.

Facebook gets to Work
While Facebook's enterprise social network has been in development for years, the social media giant only recently released Facebook at Work to the general public. It functions very much the same as the firm's core social networking platform. Users create personal profiles they can then link to a company's page -- though, crucially, users' personal and professional profiles remain separate.

While the enterprise platform's business model is seemingly still in flux, it's fair to presume that Facebook is banking on users' familiarity with their personal Facebook accounts to help drive adoption. In an article from Re/Code, Hootsuite CEO Ryan Holmes attested to this familiarity advantage, saying, "If somebody comes into the company, they know how to use this tool from day one... So training cost is zero. That's important." Facebook currently counts roughly 300 companies as clients, though its ambitions are undoubtedly far greater.

LinkedIn, Slack, and Microsoft in the crosshairs?
Any company that operates on the enterprise side of social networking and messaging should be concerned about the launch of Facebook at Work. The potential fallout extends well beyond LinkedIn, Microsoft, and Slack, though they serve as particularly useful examples of the different types of enterprise businesses Facebook could disrupt.

Microsoft and Slack are arguably more threatened than LinkedIn because of Facebook's emphasis on groups, content sharing, and messaging. These areas have long been the bastion of corporate email clients such as Microsoft's Office or Alphabet's Gmail. More recently, Slack has sought to address many of the pain points associated with traditional email clients like Microsoft Office -- and, honestly, Facebook at Work sounds an awful lot like Slack. This is especially true given Facebook's success with its own communications platform Messenger and its independent subsidiary WhatsApp. It's also worth noting that several of the business-wide features of Facebook at Work appear to largely overlap Microsoft's Yammer as well.

Facebook at Work's threat to LinkedIn isn't as obvious, though it's worth noting. LinkedIn's focus is on connecting workers with external opportunities and insights like job postings, networking, business journalism, etc. Facebook at Work, by contrast, comes across more as an intra-business tool. At the same time, however, Facebook's big picture plans could still present a threat to LinkedIn if it opts to expand its at Work's features into broader social networking.

Facebook has signaled it doesn't see at Work being an ad-supported platform. Rather it will likely pursue a freemium model, in which its prices scale with the additional services it provides to users, exactly like Slack. So while LinkedIn and its shareholders should observe Facebook's expansion of at Work with skeptical eyes, the social media giant's efforts to position at Work as a communication tool will more likely threaten the likes of Microsoft and Slack.

Suzanne Frey, an executive at Alphabet, is a member of The Motley Fool's board of directors. Andrew Tonner has no position in any stocks mentioned. The Motley Fool owns shares of and recommends Alphabet (A shares), Alphabet (C shares), Facebook, LinkedIn, and Twitter. Try any of our Foolish newsletter services free for 30 days. We Fools may not all hold the same opinions, but we all believe that considering a diverse range of insights makes us better investors. The Motley Fool has a disclosure policy.