The immuno-oncology pioneer is quickly recovering from its fall off the patent cliff.

Like most of its peers, Bristol-Myers Squibb (BMY -0.03%) has been hit hard over the past several years by patent expirations. The good news is that the company is on the front steps of another stairway to growth.

During a conference in 2011, former CEO Lamberto Andreotti claimed Bristol's growth after 2015 would be "better than anybody else can deliver." The company is poised for growth, but the years between his forecast and now have been tough enough to shake anyone's faith.

The worst is over
To the uninitiated, a glance at Bristol's annual revenue chart is an immediate turn-off. The first thing an investor needs to understand is the extent of damage patent expirations have caused and Bristol's success in mitigating the losses. Annual revenue hit its high-water mark in 2011, at just over $21 billion. That year, sales from a single drug, the blood thinner Plavix, made up about one-third of total revenue. 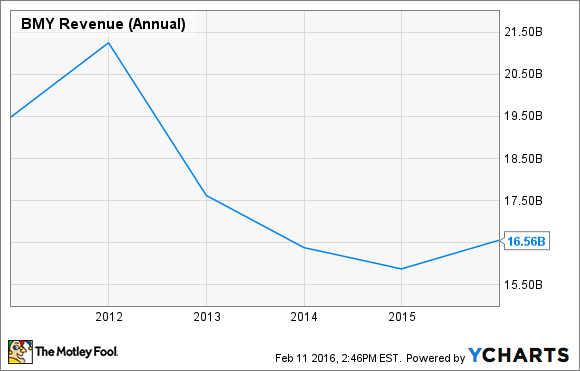 After losing exclusivity in May 2012, Plavix sales plummeted to just $2.5 billion that year. Today they're essentially zero.

Bristol took another big hit last year from generic competition for Abilify. Sales of the antipsychotic plunged 63% to $746 million last year. Despite the $1.3 billion dollar setback, strong performance from some key drugs more than offset the loss.

While Bristol still faces generic headwinds, the worst is over. I wouldn't be surprised if its total revenue passes the high-water mark set in 2011 by the end of next year.

Where are the profits?
More revenue generally leads to more profits, but that certainly wasn't the case for Bristol-Myers last year. In fact, net income fell 19% to $1.6 billion. Sometimes drugmakers boost revenue by splashing out on sales personnel, direct-to-consumer television ads, and other marketing expenses. For Bristol-Myers, however, last year's sales, general, and administrative expenses were in line with the year previous and have actually fallen somewhat since 2012. The main reason profits declined, despite the uptick in revenue, was heavy investment in research and development. 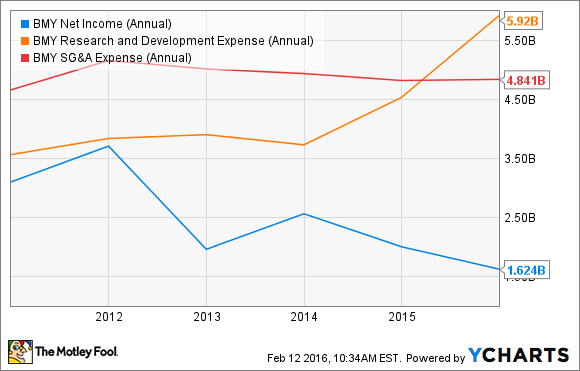 Those R&D outlays are already beginning to bear fruit. It's less than two months into the new year, and Bristol has won label expansions in the EU and U.S. for hepatitis C treatment Daklinza. The FDA has also granted Bristol's immuno-oncology drugs, Yervoy and Opdivo, an important label expansion for use as a combination therapy for some advanced melanoma patients.

Additional positive developments this year will probably keep the approvals rolling in over the next several quarters. Multiple myeloma therapy Empliciti received a recommendation for marketing approval from the European Medicines Agency's Committee for Medicinal Products for Human Use. The European Commission isn't required to follow the recommendation, but I'd be shocked if it didn't.

A bit further ahead, we'll probably see Opdivo's label expanded to include treatment of advanced head-and-neck cancer. The immuno-oncology star proved so effective at prolonging survival over standard treatments that investigators recommended stopping the trial early so patients in the control arm could benefit from Opdivo as well. Nothing is certain, but I can't recall any cancer therapies reaching their goal early then failing to win the associated label expansion.

Valuation
In its first full year, Opdivo sales reached an impressive $942 million. At its peak it could reach annual sales of $13 billion. The way it's been racking up label expansions, along with a handful of other strong recent launches, it looks like Andreotti's prediction could come true. With this in mind, you might expect Bristol-Myers shares to be trading at an all-time premium. Well, they're not. 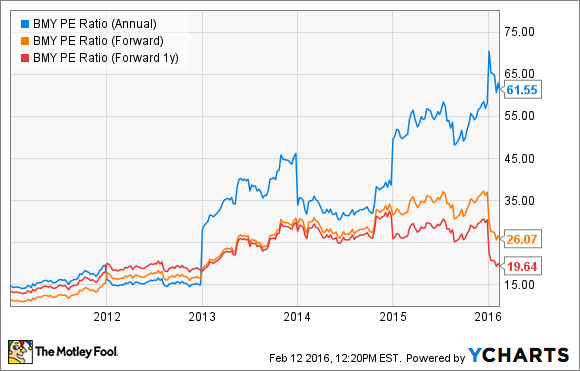 To be fair, Bristol's recent stock price of around $60 divided by last year's earnings-per-share (i.e. trailing PE ratio) is extraordinarily high. However, based on consensus earnings estimates for this year and next, the stock hasn't been this "cheap" in years.

Right now you're probably thinking, at 26 times this year's earnings estimates, Bristol's stock is well above the S&P 500 average of about 17. On their own, P/E ratios provide an incomplete picture of a stock's valuation. To put its growth in perspective, I'd like you to look at one last chart featuring Bristol's forward PEG ratio. 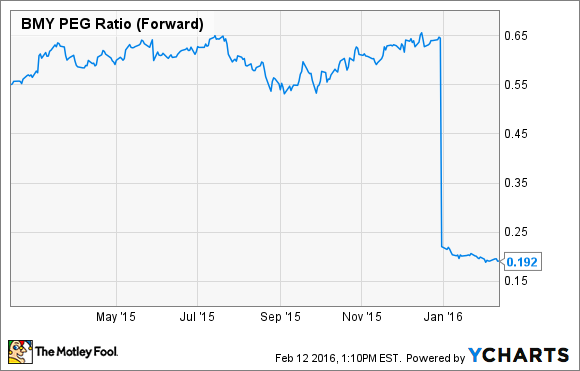 Measured as the forward P/E ratio divided by the expected earnings-per-share growth percentage during the period, a forward PEG ratio below 1.0 generally suggests a stock is undervalued. For comparison, Johnson & Johnson is trading at a forward P/E ratio just below 16, which would suggest it's "cheaper" than Bristol-Myers based on this ratio alone. Once we take into account Johnson & Johnson's expected earnings growth this year, its forward PEG ratio of 0.96 tells a different story.

It's important to point out that forward looking estimates aren't always accurate, especially for companies growing as fast as Bristol-Myers, but that's not what's keeping the stock depressed. Fears of a global economic slowdown and political rhetoric over escalating prescription drug expenses are mostly to blame for its low valuation. Although the market could become even more jittery in the months ahead, the world's most successful investors know that turbulent times like these provide the best opportunities for those prepared to hold their shares over the long term.