Please ensure Javascript is enabled for purposes of website accessibility
Log In Help Join The Motley Fool
Free Article Join Over 1 Million Premium Members And Get More In-Depth Stock Guidance and Research
By Andrew Tonner - Feb 16, 2016 at 6:45AM

In a rather dismal earnings season for large-cap tech stocks, search and mobile leviathan Alphabet (GOOG -0.27%) (GOOGL -0.21%) is perhaps the lone bright spot.

What's more, Alphabet's first earnings report to break out its new reporting structure made for one of the more interesting reads this earnings season (for those of us who enjoy that kind of thing).

Google Fiber on the move
Promising to push the entire industry one giant leap forward, Google Fiber burst on the scene in 2012 to much fanfare and soaring expectations. Fast forward to early 2016 and Fiber has arguably underperformed expectations that it would shift the paradigm. That might be about to change, for a few reasons.

For starters, Alphabet's expansion plans for Google Fiber involve more than doubling the number of cities in which the service operates, from three today to eight total approved locations. All told, Alphabet could bring Fiber to as many as 19 municipalities. 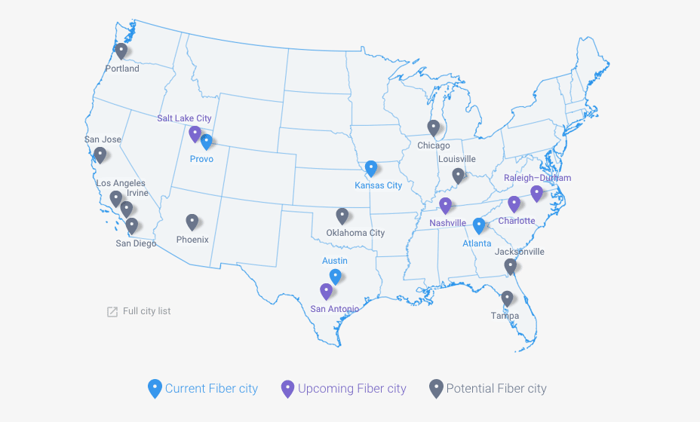 Beyond simply expanding its geographic footprint, Alphabet is toiling behind the scenes to augment the service's features. According to reports from The Washington Post, Alphabet has begun testing a land-based version of its Google Voice product. What's more, Alphabet's lobbying to overhaul set-top box standards with the FCC could set the stage for the company to expand its current cable offerings, raising the specter of a broader attack on the cable industry than has been expected.

All told, cable, Internet, and phone services yield sales just south of $80 billion annually for AT&T, Time Warner Cable, and Comcast. And though Alphabet will require years to develop a Fiber network with the reach to appreciably dent the results of AT&T, Comcast, or Time Warner Cable, current prices suggest Alphabet might enjoy a competitive advantage as it expands. As recently as last summer, Comcast's 2GB Internet service cost a whopping $299/month, with over $1,000 in installation and activation fees. Contrast this to Google Fiber's basic service costing only $74/month in Kansas City, and Fiber looks like a potential game-changer.

We already know Alphabet plans to allocate the bulk of its capex for its Other Bets reporting segment toward Fiber in 2016. Seen through this lens, it appears a justified investment, especially if you consider that driving faster connection speeds through the industry benefits Alphabet's profit centers in search and services. So as it continues to pressure industry incumbents like AT&T, Comcast, and Time Warner Cable, Alphabet's Google Fiber could take on an increasingly important role at the search giant, this year and beyond.

Editor's note: This article has been corrected to reflect that Comcast's Gigabit Pro is a 2GB service.