Please ensure Javascript is enabled for purposes of website accessibility
Log In Help Join The Motley Fool
Free Article Join Over 1 Million Premium Members And Get More In-Depth Stock Guidance and Research
By Ashraf Eassa - Updated Mar 8, 2018 at 10:44AM

For conservative investors looking for a "safe" chip company, this chip manufacturing giant might be the ticket.

Contract chip manufacturer Taiwan Semiconductor Manufacturing Company (TSM 4.06%), or TSMC, has benefited greatly from the explosion in mobile devices over the last several years. Many of the most innovative mobile chip companies have been chip designers that rely on TSMC to manufacture their chips (as building chip factories is very capital-intensive and just not reasonable for most chip companies today).

After rising more than 71% since early 2011, TSMC stock trades near all-time highs and is fairly cheap at just over 12 times trailing-12-month earnings. Is the stock worth buying at current levels? 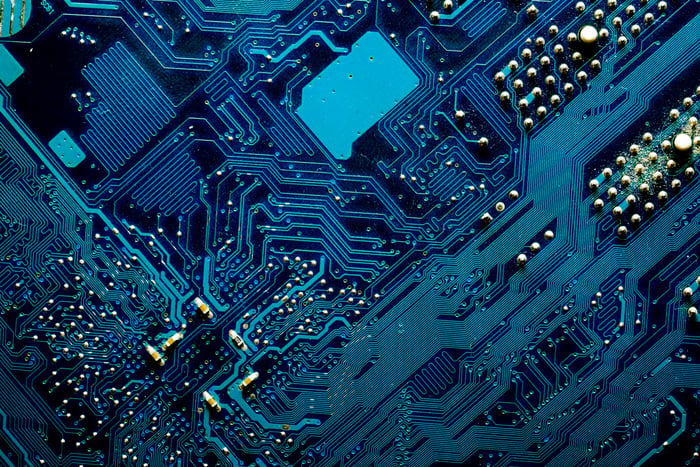 It depends on your investment goals
TSMC is a large, mature company that isn't likely to see top-line revenue growth in excess of about 10% annually, so if you're a growth-hungry investor looking to see massive capital gains, this probably isn't the stock for you.

However, I do believe that TSMC is well positioned in the chip industry, with very strong exposure to the broad market for mobile chips (communication-related revenue was 62% of the company's overall revenue last quarter). Although the mobile market is seeing growth wane, I suspect it will continue to see unit growth. Furthermore, I believe that TSMC is well positioned to grow its content share within mobile devices.

For example, on the company's most recent earnings call, TSMC management said that it believes that its average silicon content in mid-range and high-end smartphones is "increasing significantly."

However, despite strong competition, TSMC reports that in 2016 it should grow its leading-edge foundry market share significantly and it will "maintain or even expand" its market share at the more mature 28-nanometer node. Execution has certainly been a strong suit of this company over the last couple of years.

This is a well-run company that should continue to perform well as long as the smartphone market continues to grow. TSMC should also be well placed should the market for the Internet of Things take off, as I suspect the leaders in such markets will rely significantly on TSMC to manufacture their chips.

A tech company for conservative investors
I don't expect a huge amount of upside to TSMC in the near to medium term; I doubt that the market will assign the stock a significantly higher multiple than what it currently commands as its best growth days are behind it.

However, over the long term (I can't stress this part enough), I believe that TSMC will slowly and steadily continue to enjoy revenue and profit growth (I'd say mid- to high-single-digit growth in both is a reasonable expectation), ultimately translating into a higher share price from here.

As my disclosure indicates, I don't own the stock and I don't plan to add it to my portfolio as I already own shares of a chip manufacturing company that is about as cheap and has roughly similar growth prospects. However, if I were in the market for a relatively "safe" tech company with solid (albeit slow) growth prospects, TSMC would be one that I'd be happy to buy.

Ashraf Eassa has no position in any stocks mentioned. The Motley Fool has no position in any of the stocks mentioned. Try any of our Foolish newsletter services free for 30 days. We Fools may not all hold the same opinions, but we all believe that considering a diverse range of insights makes us better investors. The Motley Fool has a disclosure policy.