Bankruptcy could be around the corner if some court rulings don't go SunEdison Inc's way.

The vultures are circling SunEdison Inc (NYSE: SUNE), and we can see that some are already lining up for what scraps of value the company may have left. That was the key takeaway last week when Latin America Power's shareholders convinced a judge to limit SUNE's transactions, which may eventually lead to the seizure of $150 million in cash that they feel they're owed after SunEdison walked away from its agreement to acquire the company.

This is just the latest of SunEdison's financial troubles, and it's a very real possibility that the company will be pulled into bankruptcy sometime in 2016.

Cash could quickly dry up
To frame SunEdison's troubles, we have to look at what its near-term challenges are. On January 5, SunEdison's management said it had $619 million in cash and had 2.9 GW of projects under construction, all of which need cash to be completed. We don't know the exact cash burn rate those projects have or whether management can sell them quickly, but it's likely SunEdison will be burning through most of this cash hoard early in 2016. 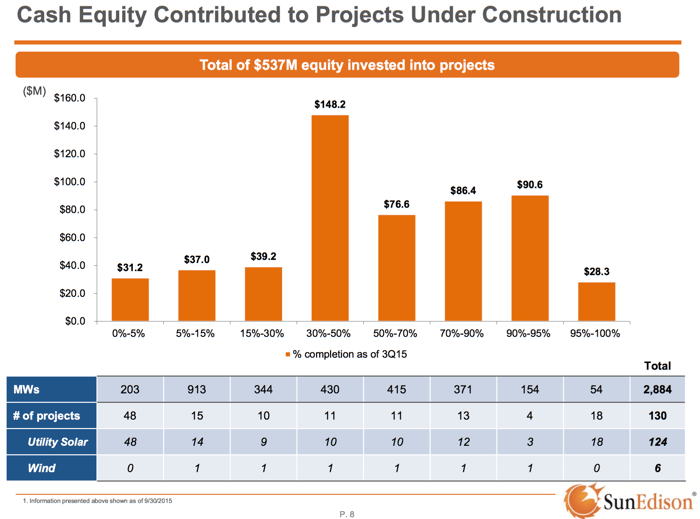 We know a little more about the cash that could be going out of SunEdison because of failed/future acquisitions. Latin America Power investors are looking for $150 million they feel they're owed, and considering the fact that the judge restricted SunEdison because of the lawsuit, they may have a solid claim.

The problem is that billionaire David Tepper is suing to block TerraForm Power's part of that transaction, and if he's successful it would leave a $799 million hole in SunEdison's balance sheet. The lawsuit could also prevent the completion of $550 million in loans that are attached to the transaction and intended to provide some growth runway.

There are a lot of moving parts here, but let's just take the easy math to show how this problem could get bad for SunEdison. It had $619 million in cash at the end of 2015, it owes $840.6 million to acquire Vivint Solar, and Latin America Power is seeking $150 million. Those three things leave SunEdison $371.6 million in the hole from a cash standpoint.

SunEdison could sell some assets to fill that hole, or drop some assets down to warehouse facilities, but with hundreds of millions of dollars needed to fund normal project building operations and $11.7 billion in debt at the end of the third quarter there's not a lot of wiggle room.

The options for SunEdison are limited
If David Tepper and/or Latin America Power wins either lawsuit, it could sink SunEdison rather quickly. The company extended itself too far by acquiring the assets it took to be the world's biggest renewable energy developer, and when the market lost faith in that strategy SunEdison didn't have the capital to dig out of its own hole.