No "real" news, today, Fools. Sometimes thinly traded, small-cap stocks move a lot. That seems to be the case with Ameresco on Feb. 17.

So what: There isn't any news about Ameresco today, or even in the past few weeks. However, today is a pretty strong market day overall, with the S&P 500 and Dow Jones Industrials both up more than 1.5% as this writing: 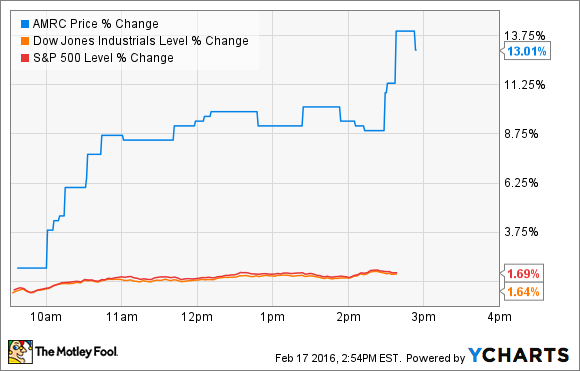 Now what: Ameresco is set to release fourth-quarter financial results in a couple of weeks, giving investors an update on the company's performance. When we last saw earnings in November, business was better, but higher tax expenses weighed on earnings, and management was concerned about a handful of alternative energy tax programs which were set to expire in 2015.

Since then several of those programs -- most notably the solar investment tax credit -- have been extended, which bodes well for the company's long-term prospects, though it won't have any impact on the results the company reports in early March, which will encompass the end of 2015.

Frankly, they'll have minimal impact on 2016, since the solar ITC was set to expire at the end of this year, and the extension covers 2017 to 2020. To the contrary, there's an argument that the extension could be negative in the short term, since there will be less pressure for Ameresco's customers to take advantage of the 30% tax credit before year-end.

But those are short-term concerns, still. More important is understanding how -- and if -- the company's steps to reignite growth and strengthen its profits are working. Stay tuned for coverage of the earnings report to find out how Ameresco is doing on that front.

For now, don't get too caught up in today's big price jump. It's nice if you hold shares, but there wasn't anything reported today that really changed the company's prospects one way or the other.

Jason Hall has no position in any stocks mentioned. The Motley Fool recommends Ameresco. Try any of our Foolish newsletter services free for 30 days. We Fools may not all hold the same opinions, but we all believe that considering a diverse range of insights makes us better investors. The Motley Fool has a disclosure policy.