Down by 10% last week, indexes have cut their year-to-date losses to less than 6% during the past three strong trading sessions.

Indexes have cut their 2016 losses roughly in half over just the past few days, and are now down less than 6%, year to date. 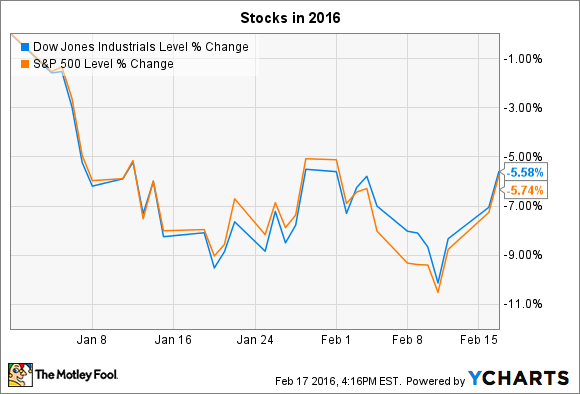 A few individual stocks performed much better than the market averages, though, including Fossil Group (FOSL -3.18%) and Garmin (GRMN -0.46%), which both posted fourth-quarter reports before the opening bell.

Fossil sees a return to growth
Watchmaker Fossil Group saw its stock spike 29% higher after posting surprisingly strong fourth-quarter earnings numbers. Sales fell by 2% overall, which was good enough to hit the upper-end of management's November guidance, which projected between 11% and 2% lower revenue during the holiday quarter.

In encouraging news for the business, the decline in watch sales showed solid improvement as the Q4 pace was a 2% loss compared to an 11% dive in the prior quarter. At that time, CEO Kosta Kartsotis said management was "not satisfied" with the double-digit sales slump, and the team managed to post a solid rebound in the following quarter.

The profit picture worsened, as Fossil's gross margin slumped to 53% of sales from 57% a year ago. As a result, net income was cut in half, to $70 million. Executives blamed foreign currency swings and price cuts for the decline.

Yet the company's 2016 outlook leaves the door open for a return to sales growth. "We remain very optimistic about our future and confident in our long-term strategies," Kartsosis said.

Fossil's executives believe the company could post a 1% revenue improvement in 2016 at the high-end of guidance, compared to last year's 9% drop. For a stock that was down 70% during the past year, that glimmer of optimism was enough to send shares sharply higher today.

Garmin overcomes the car GPS slump
Garmin's stock spiked 17% higher after its fourth-quarter results trounced consensus estimates. The GPS device maker's sales slipped by just 3% over the holiday quarter, compared to the 7% decline that analysts were bracing for. Meanwhile, profits ticked lower to $0.74 per share, which was far ahead of the $0.48 per share Wall Street forecast.

Garmin managed sales growth in four of its five main product categories, fitness, outdoor, aviation, and marine, which almost completely offset the 21% slump in its automobile division. The company also maintained good pricing discipline as its gross profit margin fell by less than one percentage point, to 53% of sales. "Despite the challenging global economic environment and the intensified competitive landscape of 2015," CEO Cliff Pemble said, "we finished strong with revenue and margins exceeding our expectations."

Management's 2016 forecast wasn't exactly a rousing one. It sees a flat sales year ahead, for a minor improvement over 2015's 2% decline. Operating profitability is expected to slip to 18%, or $510 million, from 19.5%, or $550 million, in the year that just concluded. But that forecast was better than analysts were modeling, so it makes sense that the stock would recover some of the 35% decline it has endured during the last 52 weeks.

Demitrios Kalogeropoulos has no position in any stocks mentioned. The Motley Fool recommends Fossil. Try any of our Foolish newsletter services free for 30 days. We Fools may not all hold the same opinions, but we all believe that considering a diverse range of insights makes us better investors. The Motley Fool has a disclosure policy.