A $1 billion asset sale, investments by two big names in hedge funds, and a sharp increase in oil prices are all pushing Freeport-McMoRan's shares up sharply.

What: It's been a very good week for recent investors in Freeport-McMoRan Inc. (FCX -5.89%). If today's 15% increase sticks, shares of the oil driller and metals miner will be up by almost a third since Feb. 15: 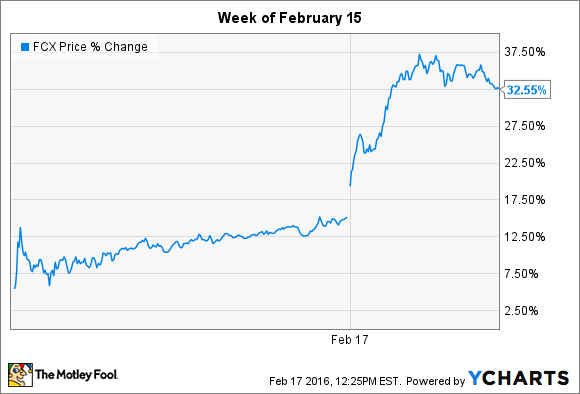 So what: The good news started off on Feb. 16, when Freeport-McMoRan filed with the Securities and Exchange Commission that it had agreed to sell a 13% stake in its joint venture copper mine with Japanese partner Sumitomo Metal Mining for $1 billion, which management indicated it would use to pay down debt.

There was also good news on the hedge fund front recently as well, with 13F filings disclosing that Carl Icahn increased his stake in the company by 4 million shares, while David Tepper's Appaloosa Management opened a stake in the company, buying 3.6 million shares in the fourth quarter. And while Tepper's stake is relatively small and his fund is well-known to actively trade and turn over its holdings, Icahn tends to invest for the long term and now holds nearly 9% of Freeport's shares.

There is more: Oil prices are up big today. West Texas crude is up more than 6%, and Brent, the international benchmark, is up over 7%. The big driver behind oil prices recently is word that some of the world's biggest oil-producing countries are agreeing to steps to cap production levels. So far, Russia, Kuwait, Saudi Arabia, and others have agreed to caps, but with the caveat that others who have yet to agree to limits, including Iran and Iraq, also cap their output. This is the first serious step toward slowing global oil production growth, which has outpaced demand growth for well over a year.

Now what: Of these three things, there is limited "real" good news to glean out of the noise. To start, Freeport-McMoRan has zero control over oil prices or over hedge fund investors, so I don't put much value in those two things with regards to the big picture.

Sure one could argue that seeing the "smart money" invest in the company is good -- and it could be -- but there's little evidence to support that they are getting it right. After all, hedge funds lose money sometimes, too. The bottom line is, it's a terrible foundation for an investing thesis.

And, yes, rising oil prices are good for the company's oil production business, but they need to go much higher from here to move the needle, and they need to be sustained increases. After all, oil prices started increasing around this time in 2015 as well, only to peak in late spring and give back all of those gains -- and then some: 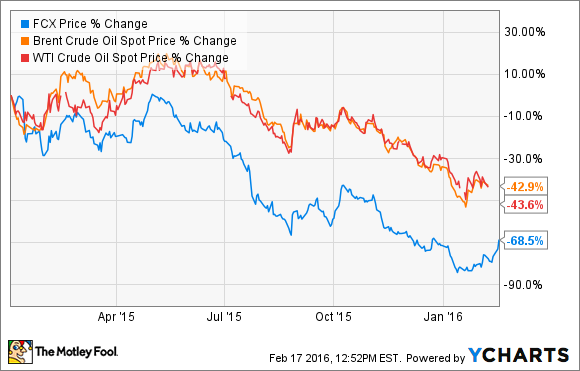 And as you can see, the weight of falling oil (and the other materials it produces) prices has weighed heavily on the company's stock, which is still down nearly 70% since the start of 2015.

The only good news that's material to the company in a measurable long-term way is the $1 billion it will be able to use to pay down debt. This comes at a good time, as Standard & Poor's recently downgraded Freeport-McMoRan's debt rating to "junk," which could mean higher debt costs and difficulty refinancing its $20 billion debt, unless the company is able to start chipping away at the balance. The $1 billion asset sale is a big step in that direction.

As to the other things driving the stock today? They look nice on paper, but they don't give the company any sustainable benefit.

Jason Hall has no position in any stocks mentioned. The Motley Fool owns shares of Freeport-McMoRan Copper & Gold. Try any of our Foolish newsletter services free for 30 days. We Fools may not all hold the same opinions, but we all believe that considering a diverse range of insights makes us better investors. The Motley Fool has a disclosure policy.