Please ensure Javascript is enabled for purposes of website accessibility
Log In Help Join The Motley Fool
Free Article Join Over 1 Million Premium Members And Get More In-Depth Stock Guidance and Research
By John Abbink - Feb 17, 2016 at 8:32AM

There's little hope for quick recovery from United Technologies' jet engine and aerospace businesses, so hope for the company's shares has to rest on its construction-related businesses, which may justify some optimism.

United Technologies (RTX -0.42%) operates four divisions in two segments: construction and building maintenance (51% of revenue) and aircraft engines/aerospace (49%). It faces challenges in both, none of which will be overcome soon. However, there is more hope for improvement in the foreseeable future from its construction and building maintenance businesses, on which I will concentrate here.

These are Otis ($12 billion revenue) and Climate, Controls, and Security ($17 billion), which consists of Carrier, Kidde, Chubb, and other brands. Otis Elevator is exclusively oriented toward commercial construction. While the majority of Climate, Controls, and Security revenue also comes from commercial structures, it has a significant businesses selling HVAC and security devices to residential customers (18% of construction segment revenue) and it manufactures commercial (6%) and transport refrigeration (6%, comprising refrigerated trailers, railcars, and shipping containers).

Equipment sales to commercial customers contribute 46% of segment revenue and maintenance 36%. United Technologies doesn't perform residential product maintenance. All of the commercial products it supplies are critical to its customers, so service, while costly to provide, is correspondingly profitable. The company has a valuable installed base, especially in elevators, which would be more valuable if it could better address the competitive threat of third-party servicers. Of the challenges facing United Technologies, this is among the more important. It won't be solved overnight, but it's fundamentally a problem of management and incentive structures, so it's curable.

With 46% of building-related revenue coming from commercial construction, and another 38% dependent on the installed base created by those sales, the health of commercial construction is clearly essential to these businesses. In the U.S., where Otis' and Carrier's market positions are strong, this has not been a concern: 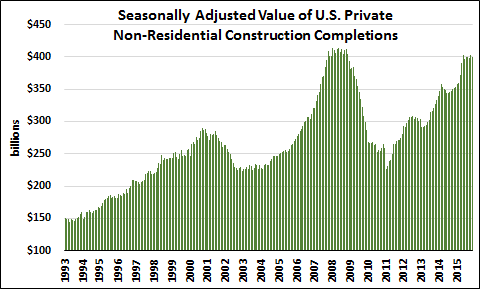 At the end of July, the consensus of forecasts compiled by the American Institute of Architects was for an 8.2% increase in the value of U.S. nonresidential construction in 2016 after 8.9% in 2015.

However, most of United Technologies' commercial building-related activities are outside the U.S., where, in most cases, it doesn't enjoy market leadership. One fairly authoritative source forecasts that the value of European construction output growth will accelerate to 3% after a disappointing 1.6% increase in 2015: 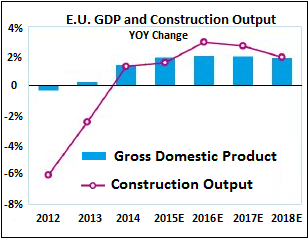 Asia is only a little less important to United Technologies' commercial construction businesses than Europe or the Americas. CBRE, a global commercial real estate advisor, expects the value of new Asian construction starts to slow but to continue to increase in 2016. So the global outlook for commercial construction is pretty favorable -- decelerating slightly in the U.S., more in Asia, but accelerating in Europe. Slower construction activity in China has already affected United Technologies' business there, and further deterioration will probably be less than many analysts think. Like other companies that sought to borrow glamour from China, United Technologies doubtless wishes it hadn't implied that the country had more importance to it than it actually does.

Although there is a significant replacement market, United Technologies' residential businesses are largely driven by housebuilding. In contrast to commercial construction, this hasn't returned to health: 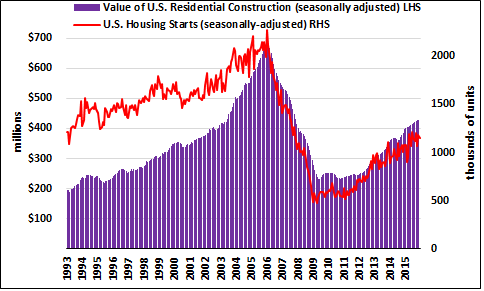 Nevertheless, it has recovered from the depths of the recession, and it's notable that the average price per unit has increased. This suggests that newbuilds are more likely to have higher-priced HVAC and security. This, and apparently a market share gain, boosted nine-month residential unit sales by 7%. After so much disappointment, it would be foolish to expect rapid acceleration in housebuilding, but it's not likely to retreat, either. Continued modest improvement is the most plausible forecast. Carrier sells residential units elsewhere, but the U.S. is its largest market.

Transport refrigeration had a spectacular 2015, with nine-month unit sales up 19%. It's unlikely to continue to grow so fast, but demand is still firm. Reduced demand from emerging economies, which were important customers, cut into commercial refrigeration sales. Over the longer run, demand is forecast to grow at an average 5.7% annually. Carrier is the largest supplier of such equipment, but it's a fragmented market. Commercial refrigeration and security are probably the areas where United Technologies is most likely to seek acquisitions.

The company's stock has been punished: 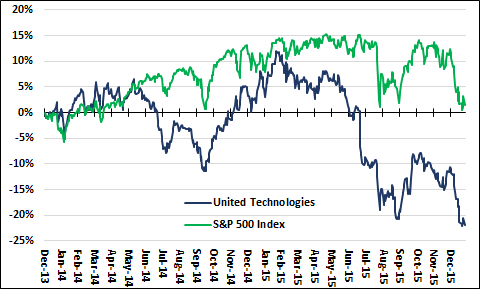 Many industrials received similar treatment, as investors absorbed the implications of dollar strength, Chinese weakness, and collapsing commodity prices. But United Technologies has some unique problems, notably the never-ending travails of its PurePower jet engines, although it has at last delivered some. United Technologies also suffers from the outlooks for the F-35 (which continues to be delayed and see orders scaled back) and military spending generally, which is at its lowest level in decades. The problems affecting Pratt & Whitney (which has problems with its new commercial engine as well as the issues mentioned with the military) and the aerospace unit are well known, and each week seems to offer another indication that they're no closer to solution. Even if they evaporated overnight, investors might applaud, but 2016 and probably 2017 earnings wouldn't be affected. If there are to be any positive earnings (as opposed to technical or order book) surprises from United Technologies, they'll come from its construction segment.

One surprise is more or less built into the stock price already: Earnings in the construction-related half of the company can pretty reliably be expected to exceed analysts' dismal expectations. The effects of the decline in the euro will have been worked through by the end of March, and if it doesn't slide further, year-over-year comparisons will be neutral thereafter. Demand, even in Asia, remains firm, if not stellar. Some progress may even be made toward stanching the market share losses in services.

Although United Technologies has pledged to return the proceeds of the Sikorsky sale to shareholders, it has $1 billion to $2 billion to make midsize acquisitions that could be both accretive and strategically significant. Building should provide a bulwark for United Technologies' stock performance this year.