Ferrari has one of the world's greatest brand names. But the company is lacking something that's very important to most investors.

Shares of Ferrari (RACE -1.52%) are up over 17% since last Thursday's close, with investors giving the beaten-up supercar maker a second look after several major investors, including George Soros' investment fund, disclosed that they had taken substantial stakes in the supercar maker.

But even with that big jump, Ferrari's shares are still down over 35% since it went public in October. What's wrong with the Prancing Horse?

Ferrari's new investors haven't liked what they've seen
You'd think that Ferrari would be doing fairly well right now, despite the market's recent tumult. After all, the company had its best year ever in terms of sales in 2015. And while Ferrari isn't quite a recession-proof business, its customer base isn't exactly living paycheck-to-paycheck.

So what's the problem that has made its shares do this since its IPO? 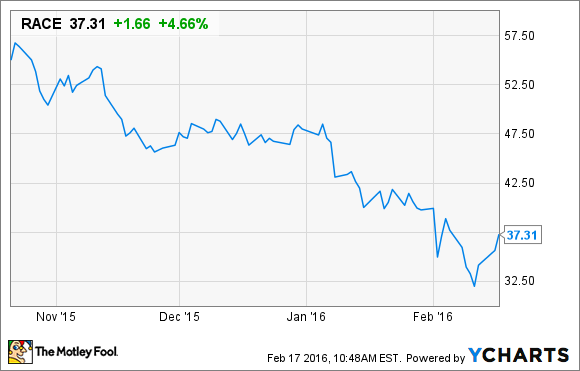 I think the big problem is that a lot of Ferrari's early investors are just now starting to figure out the business. And what they're learning is a disappointment.

Why Ferrari might be a disappointment for many investors
There was some good news in Ferrari's presentation of its 2015 earnings on February 2: Shipments were up 6% and net income was up 9.4%.

Nothing too bad there. But the problem seems to be the guidance that Ferrari gave for 2016. It expects shipments to grow just 3.3%, just a tiny increase in adjusted pre-tax earnings, and barely a dent in the big debt load it took on when it separated from Fiat Chrysler Automobiles (FCAU).

To some extent, the blah-looking outlook is a reflection of global economic realities: China's once-hot luxury market is slowing. But a lot of it is just simply the fact that that's the way Ferrari is.

Ferrari isn't a company aggressively searching for growth. On the contrary: The company limits its own production to preserve the brand's exclusivity and pricing power. Ferrari sold just 7,664 cars in 2015. CEO Sergio Marchionne said on February 2 that it might raise production to about 9,000 a year -- by 2019.

But it's unlikely to ever go much higher. And that's the conundrum facing Ferrari investors: Where's the growth going to come from?

Ferrari's not a growth stock, and investors have turned away
It's true that economic factors are probably weighing on the stock's price to some extent right now. Ferrari's sales fell slightly (1%) in the fourth quarter, and its net income fell 30% year over year.

Some of that was due to where Ferrari is in its model cycle. Its lower-profit V8 cars are new and selling well, while its higher-profit V12 models are several years old and sales have fallen off. None of that is bad, and it'll shift when the next generation of V12-powered models are introduced.

(It's probably also worth mentioning that the 2014 comparisons include some sales of the hyper-expensive (and almost certainly hyper-profitable) La Ferrari supercar. The La Ferrari was a limited edition of just 499 cars, each priced at over $1 million.)

But I think a lot of the reason for Ferrari's share-price decline is simply this: All of the investors in Ferrari's stock were new to the company, and some of them didn't like what they learned from the fourth-quarter call: that Ferrari isn't ever going to be a company with a big growth story. And so they sold.