Over the past few years, IBM (IBM 0.72%) has invested in higher-growth cloud and mobility services to pivot away from its fading IT services, middleware, and hardware businesses. It also divested lower-margin businesses like consumer PCs, low-end servers, and its chip foundry. CEO Ginni Rometty often refers to Big Blue's higher-growth businesses as its "strategic imperatives" and its divested ones as "empty calories."

To complement the expansion of its cloud and mobile businesses, IBM recently announced plans to acquire three online ad agencies -- Resource/Ammirati, Aperto, and exc.io -- all for undisclosed terms. The first company is based in the U.S., while the other two are located in Germany. Why is IBM buying these ad agencies, and how could they strengthen its strategic imperatives?

Understanding IBM's advertising ambitions
IBM's digital agency unit, IBM iX (Interactive Experience), helps clients improve their ad targeting capabilities by analyzing cloud-based data with its AI platform Watson. IBM claims that the unit, which has over 10,000 employees and 25 offices worldwide, is the world's largest digital agency. Resource/Ammirati and Aperto both have over 300 employees, while exc.io has about 200. All of those employees are expected to join IBM iX.

Big online advertisers have already tapped IBM for their analytics needs. In Oct. 2014, Twitter partnered with IBM to analyze its tweets for enterprise customers. The two companies expanded that partnership last March with new cloud-based services for businesses and developers looking to mine Twitter data or merge it with other data sources. Two months later, Facebook signed a similar deal with IBM to help its clients refine their ad-targeting abilities.

Gaining those clients complements IBM's $1.25 billion deal with WPP, the world's largest advertising firm. That deal, which was inked in Dec. 2014, will upgrade WPP's systems to the "hybrid cloud," which merges on-premise private cloud data with an off-site public cloud. That solution suits many large companies like WPP, which aren't willing or ready to migrate all their data to the public cloud. Offering analytics services to WPP's clients could further boost IBM iX's reach.

The business of martech
Another driving factor behind IBM's ad agency acquisitions is the rise of marketing clouds. By 2017, Gartner estimates that the largest portion of a company's IT spend will be controlled by CMOs (chief marketing officers) instead of CIOs (chief information officers). That shift has prompted tech companies to directly sell "martech" (marketing technology) to CMOs.

That's why Salesforce (CRM -0.32%) purchased ExactTarget for $2.5 billion in 2013 to beef up its marketing cloud. During the first nine months of 2015, Salesforce's marketing cloud revenue rose 29% annually to $470 million. 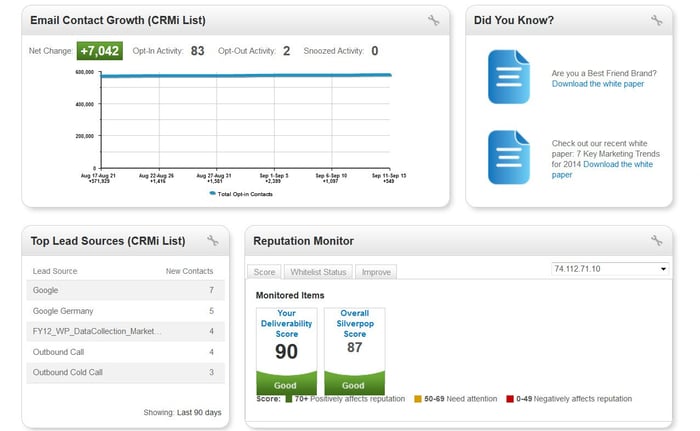 But what does this all mean for IBM's top line?
While we can see how IBM is connecting IBM iX, Watson, its hybrid cloud installations, and its marketing cloud together, it's unclear that much revenue this effort actually generates.

But despite all those positive figures, its global tech and business services revenue (15% of sales) respectively declined 7% and 10% annually, and total revenue fell 12%. IBM's marketing cloud exists somewhere between its gains in cloud/analytics and its declines in tech/business services. Until IBM discloses its marketing cloud revenue quarterly like Salesforce does, investors won't be able to gauge how much progress the company is actually making in the martech space. However, investors should still keep an eye on any major investments IBM makes in the space.

Leo Sun has no position in any stocks mentioned. The Motley Fool owns shares of and recommends Facebook and Twitter. The Motley Fool recommends Gartner, Salesforce.com, and Sherwin-Williams. Try any of our Foolish newsletter services free for 30 days. We Fools may not all hold the same opinions, but we all believe that considering a diverse range of insights makes us better investors. The Motley Fool has a disclosure policy.