Please ensure Javascript is enabled for purposes of website accessibility
Log In Help Join The Motley Fool
Free Article Join Over 1 Million Premium Members And Get More In-Depth Stock Guidance and Research
By Tyler Crowe - Feb 18, 2016 at 7:55AM

As refining margins declined in the fourth quarter, so too did Calumet's chances of putting together a strong quarter.

Over the prior few quarters, Calumet Specialty Products (CLMT 0.64%) looked to be turning the corner by improving its financial position and generating strong returns for its shareholders. Then again, that was during a time when refining margins across the entire industry were at some of the best they have been in years.

As the margin between crude oil and refined products narrows as it did last quarter, Calumet's recent earnings suffered mightily because of it. So let's take a quick look at the company's results from the prior quarter and try to get a pulse as to what the company can do from here to improve operations.

By the numbers (in millions except per share data)

I should note here that the company's gross profit and distributable cash flow for the quarter were adjusted to reflect some one-time charges related to the several items, including some inventory writedowns and the impact of renewable identification numbers for compliance with the renewable-fuels act. If we were to include these charges, both figures for the fourth quarter could be even lower than where they were.

The largest change between this quarter and the prior one is the large decline in refining margins. Even after adjusting for the one-time charges, earnings of the company's fuel products segment were almost completely wiped out. The other stain on those results was a further decline in the oil company's business as rig counts and drilling activity continue to decline across the United States. 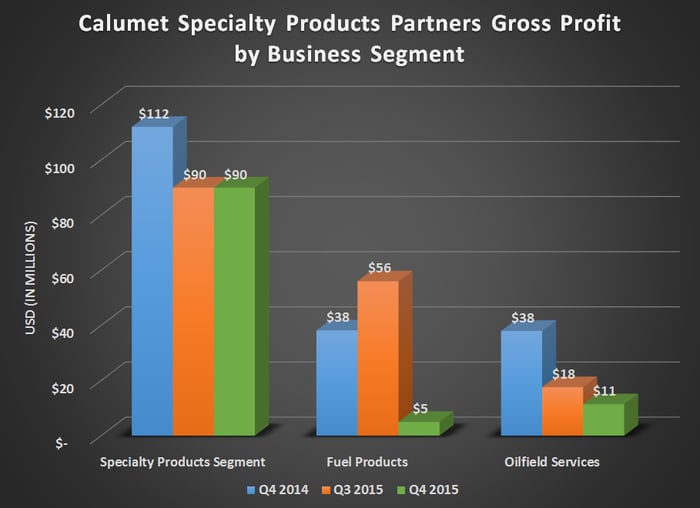 A new path forward for Calumet
At the beginning of the year, CEO Timothy Go took the helm at Calumet, and as part of this earnings release we got to see his vision for the company going forward. Some of the things he said were the same things that you would expect any manager to say: operational excellence, focus on high returns, and so on At the same time, there were some meaty things he had to say that look like things investors can really get behind.

The first initiative that looked appealing for the company was to reconfigure many of its refineries to exploit the price difference between American and Canadian crude oil. Western Canadian Select is a much heavier, harder to refine type of oil, but it also is a much cheaper feedstock to use. Over the past five years, Western Canadian Select has sold for great than a $10 discount to the American benchmark.

So the company intends to drastically increase its consumption of this crude. By the end of the year, Calumet intends to double its Canadian heavy crude purchases to 40,000-45,000 barrels per day, and to ultimately have its heavy crude rate at 70,000 barrels per day long term. By doing this, the company could really help recover some of the losses it has seen at its fuel products segment and possibly increase its Specialty Products margins.

On top of that, Go intends to scale back on major capital projects such as its newly constructed refinery in Montana and focus instead on smaller, quick hit investments across its facilities that can improve returns. This will probably involve simple changes such as adjusting production mixes to focus on higher-margin products such as those on the specialty products side of the business and try to scale back its fuels segment.

What a Fool believes
Calumet had a good run in 2015, thanks to some very favorable refining conditions. If the company wants to keep the good times going, though, it will need to do a bit of retooling of its facilities. Increasing its run of Canadian heavy crude will be a step in the right direction, but it will also have to really nail it when it comes to making those small operational improvements across its refining assets to really move the needle. Shares of Calumet may look tempting with a yield of 22%, but I think we all know that a level that high suggests we could see a distribution cut unless the company sees some drastic improvements to its financial standing soon.