Though their career track record is deserving of placement on the Mount Rushmore of investing, if such a thing existed, Berkshire Hathaway (NYSE:BRK.A) (NYSE:BRK.B) leaders Warren Buffett and Charlie Munger have made arguably their least-successful investment ever in IT behemoth IBM (NYSE:IBM). 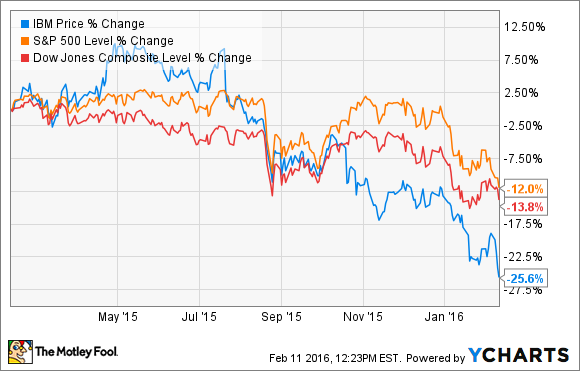 In just the past year, IBM has dramatically underperformed the market, creating downward pressure on Berkshire Hathaway's own performance in the process. With the company now trading below the levels when Berkshire Hathaway first disclosed its stake in 2011, Vice Chairman Charlie Munger recently offered some thoughts on Big Blue that fall well short of a vote of confidence.

Munger voices his concerns
Speaking at the annual meeting for Daily Journal Corp, a publishing company where he serves as chairman, Munger recently voiced a largely neutral opinion on IBM's outlook. Per reporting from Bloomberg, Munger told attendees, "I am neither a believer or a disbeliever. They have an old business from which cash continues to flow, but they want a new product that is a hit. ... I would say the jury is out. It may work in a mediocre way, it make work big, I just don't know."

It's hard to blame the Berkshire Hathaway vice chairman for his wavering viewpoint. IBM's sloth-like transition from its hardware, software, and services business model to one predicated on big data analytics, cloud services, and the like has admittedly been a trying one for investors. As was widely noted in the wake of its disappointing earnings report in January, IBM's sales have now declined for 15 straight quarters, though its profits have proven far more durable. For instance, IBM's net income actually increased 9.7% for its full-year 2015, which at least partially speaks to the contrarian investment thesis I find so intriguing with IBM.

"Be greedy when others are fearful"
As Buffett himself is famous for imploring, the best buying opportunities often arise in situations when the market has given up on a particular company, a description that certainly fits IBM today.

Despite the company still increasing its profits, IBM's shares trade at a rock-bottom eight times their trailing-12-months revenue. For context, the S&P 500 trades at 20 times. And with IBM's 4.4% yield, strong balance sheet, and track record of growing its payouts, investors also enjoy the prospect of getting paid pretty handsomely as they wait for IBM's turnaround to take shape. And though it has much progress to make, IBM's strategic initiatives grew to account for 35% of Big Blue's total sales in its FY 2015. 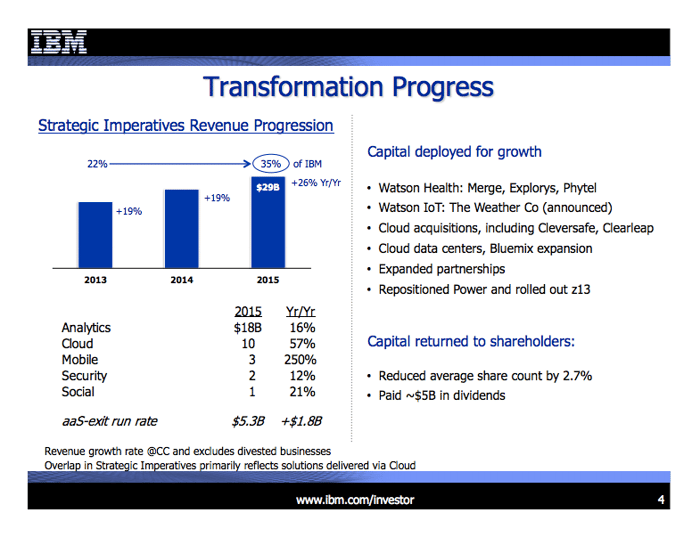 What's more, with its massive roster of global clients, IBM already enjoys an installed distribution channel into which it can sell its new technologies, a fact many overlook when appraising IBM's shifting strategic focus. The company also continues to produce reams of intellectual property, taking the crown for top patent producer for a 23rd straight year in 2015.

IBM faces stiff competition in some of its core growth initiatives, most notably cloud computing, where tech giants Amazon and Microsoft enjoy larger market share than Big Blue. However, given the massive growth runway inherent in markets like cloud computing, each major entrant should be able to carve out its own valuable franchise amid this "gold rush" period.

While even great investors like Charlie Munger take a decidedly cautious approach to IBM, the company's mix of extreme value today, and the continued shift in its business, make it one of the more interesting contrarian plays in all of tech today.