Please ensure Javascript is enabled for purposes of website accessibility
Log In Help Join The Motley Fool
Free Article Join Over 1 Million Premium Members And Get More In-Depth Stock Guidance and Research
By Daniel B. Kline - Feb 18, 2016 at 11:30AM

The company is fighting for a merger, which may not change its future much, given the elephant in the room.

Staples (SPLS) has had a rough last few months.

The company is fighting the Federal Trade Commission's efforts to stop its $5.5 billion acquisition of rival Office Depot (ODP -3.41%). Even though Staples offered to sell off or give up $1.25 billion worth of commercial contracts, according to Fortune, the FTC hasn't backed down, nor has it made a counteroffer.

This situation has put the company into a holding pattern that looks like it will end up in court, even though the retail office-supplies giant has said it was "still willing to continue negotiations" with the FTC as to what structure the deal would need to take to be approved. That stance has forced the company to plod ahead with litigation that won't be heard in court until May 10, the magazine reported.

All of this uncertainty has crushed Staples stock over the past year. It's lost half of its value since its 2015 opening, and the situation hasn't improved in 2016, with Staples stock staying on a downward trend. It closed at $8.19 on Feb. 11.

The news, in short, hasn't been good for Staples, and better things don't appear to be in the near-term future. In fact, the best thing you can say about Staples stock is that maybe it has found or come close to its bottom, which would limit risk going forward. 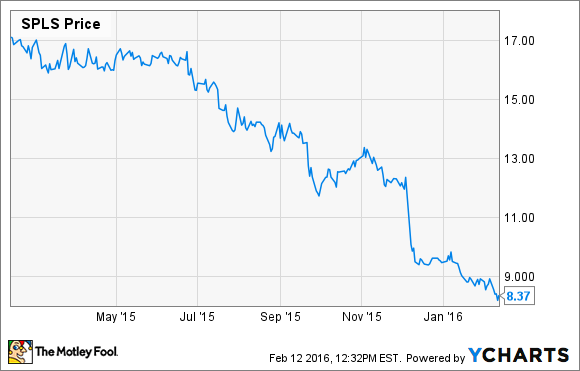 Why is the merger not being approved?
It's fairly hard to make a case for the FTC's denial of the Staples buyout of Office Depot on antitrust of competition grounds. Yes, the deal would leave the United States with one dominant office-supplies retailer, but that hardly matters when online competition is intensifying.

If the FTC approved the merger, it wouldn't give Staples a monopoly. Instead, it would slightly enhance its ability to be efficient and compete better.

If the merger happens, it would allow Staples to close stores, trim advertising costs, and take a pesky rival off the game board.

"Financially, this transaction makes sense and is necessary to the long-term health of these two companies," retail analyst David Strasser told investors for Janney Capital Markets, Philly.com reported. Both companies have already gone public with plans to close stores, and that could be accelerated, since roughly half of Office Depot stores are within 5 miles of a Staples, according to Strasser.

The analyst expects that if the merger were approved, the companies would close about 1,000 over the next two years for a savings of $1 billion. That's good, but it doesn't change the overall problem that Staples still operates a primarily brick-and-mortar business with all its associated costs while competing with a company that offers free shipping and generally lower prices.

Staples stock is a risk
Merger or no merger, it's hard to see how a company built on giant retail stores selling office supplies has much of an upside. Staples is a relic of a bygone era -- like a bookstore or a record store -- that serves a dwindling clientele of people who still like going to stores.

Staples isn't all that risky in the short term because it has already fallen so far. In the long run, its biggest risk is insolvency by virtue of irrelevance. But while the FTC has been pretty resolute, the company should bounce back from its low in the unlikely event some sort of conditional approval gets offered.

This stock pretty much defines the word "risky." It's a company stuck with an enormous amount of legacy infrastructure facing a more nimble, much larger competitor. Staples may still turn things around, but that's a very long road down an uncertain path that offers a lot of risk for shareholders.

Daniel Kline has no position in any stocks mentioned. The Motley Fool has no position in any of the stocks mentioned. Try any of our Foolish newsletter services free for 30 days. We Fools may not all hold the same opinions, but we all believe that considering a diverse range of insights makes us better investors. The Motley Fool has a disclosure policy.