Global market pressures have recently made both tech behemoths' stocks relative bargains, but one looks like the better choice to add to most portfolios now.

For all the wrong reasons, the stocks prices of both Alphabet (GOOG -2.19%) (GOOGL -2.22%) and Microsoft (MSFT -1.86%) have come under pressure in recent days. Following their respective earnings reports, it appeared investors were duly impressed with both tech behemoths, but now global market conditions have taken a toll.

Microsoft closed up more than $3 a share, to $55.09, the day after releasing quarterly earnings news on Jan. 28. Alphabet's Class C stock gained $12.65 a share after it announced fourth-quarter results on Feb. 1, climbing to $764.65. And that rise came on top of the jump it took in the days leading up to the earnings release: It had been sitting at $699.99 on Jan. 27. However, the past week or so has been unkind to Alphabet and Microsoft, which is great news for value investors.

The case for Alphabet
Alphabet ended its fourth quarter with $21.33 billion in sales, an 18% improvement from a year before. That also compares impressively to Q4 2014 in another way. That quarter, Alphabet reported year-over-year sales growth of "only" 15%. Given its size, the end of 2014 was nothing to sneeze at. Yet not only has Alphabet's upward momentum continued, sales are actually growing faster than they were a year ago.

Based on estimates, Alphabet is positioned for continued growth in 2016. As the undisputed digital advertising leader, Alphabet stands to benefit the most as more brands shift more of their marketing budgets online. One study suggests that on a global basis, digital spots are expected to grow more than 17% this year to nearly $160 billion. And it gets better.

For the first time ever, worldwide digital ad spend is projected to exceed the outlay for TV spots by next year. To put that in perspective, over $500 billion will be spent on ads this year, and it won't be long until folks like Alphabet are grabbing the lion's share of that total. Alphabet doesn't break out specifics, but CFO Ruth Porat did say that mobile and YouTube were two key drivers of last year's success, which also bodes well.

Of all those dollars spent on digital ads across the globe, over $100 billion will target mobile users in 2016, according to eMarketer estimates. And with the proliferation of video spots also on the uptick, Alphabet's ridiculously popular YouTube will continue to grow. 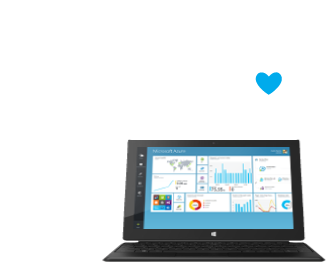 The case for Microsoft
Microsoft is also leading the way in one of the world's fastest-growing markets: the cloud. Not only does its Azure platform address the opportunity cloud infrastructure represents, even more importantly, it's the basis for Microsoft's Software-as-a-Service (SaaS) products, including its flagship Office 365 and Dynamics CRM (customer relationship management).

As quickly as the cloud platform market is growing -- one forecast calls for nearly 20% annual growth to $43 billion in sales by 2018 -- SaaS cloud revenue is estimated to climb to over $68 billion in two years. Last quarter's more than $9.4 billion annual run rate of commercial cloud revenue already puts Microsoft at or near the top of the provider list.

The record-breaking adoption rate of Windows 10, which has been installed on over 200 million devices, is boosting other key areas. Dynamics CRM revenue climbed by double-digits again last quarter, and the number of users more than doubled for the fifth straight quarter. All those devices running Windows 10 also helped boost Bing search revenue -- again -- by 21%.

Detachable tablets, according to IDC, are one of the few growing device markets, which suits Microsoft's Surface Pro line-up perfectly. CEO Satya Nadella isn't sharing sales specifics, but Surface revenue climbed 29% last quarter, after accounting for currency headwinds. Based on IDC's data and all the buzz surrounding Surface and Surface-like pseudo-tablets, Microsoft seems to be on to something.

From purely a growth perspective, Alphabet's upside due to its dominant position in the fast-growing digital ad space, its improved mobile solutions, and its wildly popular YouTube gives it the edge. Considering its average price target of $924.42, analysts seem to agree.

More conservative investors shouldn't discount Microsoft's nearly 3% dividend yield on top of its more modest, though still legitimate, upside. But overall, the for value, Alphabet's current share price around $685 -- give or take -- is woefully cheap, moving it to the head of the class.