Investors might not be happy with the drugmaker's earnings or maybe it's just noise.

What: Momenta Pharmaceuticals (MNTA) is down 11% at 12:00 p.m. EST Thursday after releasing fourth quarter earnings this morning.

So what: It's tempting to say that investors aren't happy with the earnings release, but, like most small drugmakers, Momenta Pharmaceuticals has been volatile lately. The stock traded lower than this as recently as Friday. It appears that traders might be playing the sell-the-news game after having bought in over the last two days in advance of the earnings release. 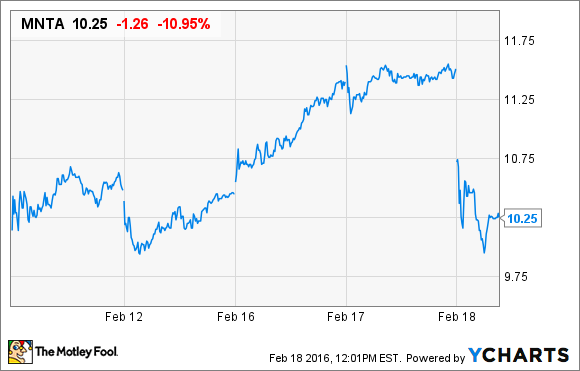 For the record, Momenta Pharmaceuticals booked fourth-quarter revenues of $22.4 million. The largest -- and most important -- part of the revenue comes from the $15.6 million that makes up Momenta's portion of its 50/50 split with Novartis (NVS -1.84%) on sales of Glatopa, their generic version of Teva Pharmaceutical's Copaxone.

Revenue from Glatopa was up substantially from the $8.7 million Momenta booked in the third quarter, but, last quarter, the drugmaker said that was artificially low because middlemen were working through inventory that was recorded in the second quarter after Novartis' launch in June.

Now what: While Glatopa can help pay some of Momenta's bills -- the company still registered a $29 million loss for the quarter -- the drugmaker has bigger opportunities in its pipeline, including a generic version of three-times weekly version of Copaxone that's also partnered with Novartis. Teva Pharmaceuticals has been pushing patients to switch to its newer product to hold onto them as long as possible. Momenta Pharmaceuticals also has a new deal with Mylan to market its biosimilar products once they hit the market.

Investors should be focused on these long-term value-driving events rather than the daily gyrations of the stock price, whether it's from Glatopa sales that didn't impress or traders playing the event.

Brian Orelli has no position in any stocks mentioned. The Motley Fool recommends Momenta Pharmaceuticals and Mylan. Try any of our Foolish newsletter services free for 30 days. We Fools may not all hold the same opinions, but we all believe that considering a diverse range of insights makes us better investors. The Motley Fool has a disclosure policy.