Investing in the oil and gas industry has largely been a losing endeavor during the past two years. Since oil prices peaked in mid-June 2014, oil stock prices have fallen hard and fast. Here's how Vanguard Energy ETF (NYSEMKT:VDE), iShares Dow Jones US Energy Sector (ETF) (NYSEMKT:IYE), and Energy Select Sector SPDR (ETF) (NYSEMKT:XLE) have performed since oil prices started falling: 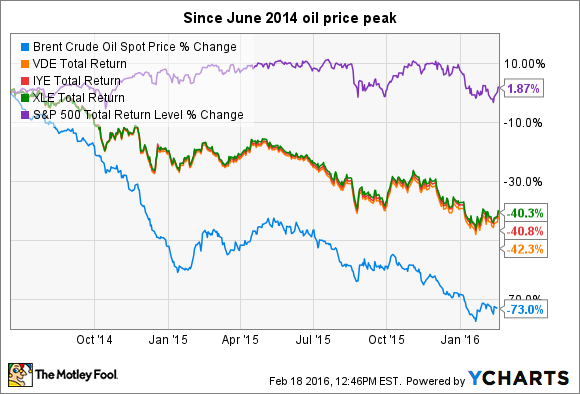 Furthermore, there are no guarantees that the current downturn will end anytime soon -- even with Russia and Saudi Arabia talking about production freezes. Nonetheless, there remain solid companies in the oil and gas business that should make for great long-term investments.

Phillips 66(NYSE:PSX)particularly stands out as a great long-term investment today, especially if you're looking for companies set to grow their dividend for years to come. Let's talk about why.

Phillips 66 is using today's cash cow to invest in better growth prospects
Today, Phillips 66 derives the vast majority of its profits from its refining and marketing business, meaning oil and the products it makes from oil. But at the same time, the company isn't investing the majority of the profits from its refining back into that business, beyond maintenance and bang-for-the-buck efficiency and capability improvements. This is largely because demand growth for refined products is growing at a relatively slow pace, and the returns on capital invested in additional refining capacity aren't particularly high.

Instead, the company is taking those fat cash flows and investing them in expanding the company's midstream and petrochemicals segments. Natural gas gathering and pipeline infrastructure in the U.S. needs to grow much larger during the next five years in order to connect many of the new gas-producing plays to the system, and the company is doing that, using both its master limited partnership Phillips 66 Partners LP (NYSE:PSXP), and DCP Midstream Partners LP (NYSE:DCP), to build out and manage this infrastructure.

A recent deal demonstrates this. On February 17, it was announced that Phillips 66 Partners would pay $236 million in assumed debt and shares for a 25% stake in the recently completed Sweeny Fractionator One and Clemens Caverns NGL storage facility. In essence, this is a partial "drop-down" deal, where Phillips 66 partners takes on debt in exchange for taking on assets previously part of Phillips 66 directly. As Phillips 66 also continues to develop more capacity to process natural gas and NGLs for export, expect to see more of these types of deals.

The company also continues to expand the capacity of its joint venture chemicals business with Chevron, CPChem. On the latest earnings call, CEO Greg Garland said that the company's expansion in ethylene and polyethylene capacity was scheduled to go online in mid-2017, and would give CPChem 40% higher production capacity.

Payouts should grow and the business should evolve
The short-term is full of unknowns, and the energy market isn't likely to calm down anytime soon. But Phillips 66 is one of the most-solid and well-run businesses in the energy industry.

Phillips 66 yields nearly 3% at recent prices, and management seems ready to expand that by double digits on a yearly basis for years to come. Since going public in a spinoff from ConocoPhillips in 2012, Phillips 66's dividend has already been increased 180%, yet the company still only pays out about 28% of earnings in dividends. 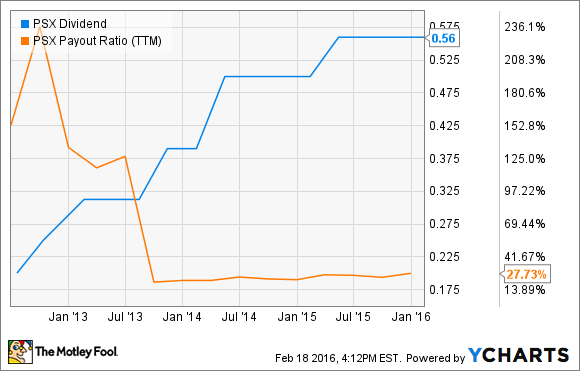 Factor in a very aggressive share-buyback program, which has reduced the share count by 15% since 2012, and continued growth of the dividend payout is very likely for the foreseeable future.

Don't get me wrong -- Phillips 66 stock could fall in the short term; there's no predicting what happens in the weeks and months ahead. Looking at the bigger picture, however, and beyond the short-term volatility that's driving stock prices, Phillips 66 is a great value today, and should be a great income growth stock for many years to come.