Please ensure Javascript is enabled for purposes of website accessibility
Log In Help Join The Motley Fool
Free Article Join Over 1 Million Premium Members And Get More In-Depth Stock Guidance and Research
By Matthew DiLallo - Feb 18, 2016 at 8:08AM

The general partner and its MLP, Williams Partners, both delivered worrisome distribution coverage ratios during the quarter.

The fourth-quarter earnings reports of Williams Companies (WMB 0.26%) and Williams Partners (NYSE: WPZ) had a little something for everyone. If you're a glass-half-full type, there was plenty of growth to go around, as well as the assurance that Williams Companies' merger to Energy Transfer Partners (ET 0.40%) isn't falling through. Still, those who look at what's missing from the glass can point to the worrisome coverage ratios and exposure to commodity prices as sources of concern.

With that, let's dig in a bit deeper into the reports.

Drilling down into Williams Companies' numbers
Williams Companies reported fourth-quarter adjusted EBITDA of $1.07 billion, up 25% year over year. That growth was largely fueled by a 36% year-over-year increase in fee-based revenue at Williams Partners thanks to major projects going into service. However, actual cash available for dividends fell 1.4% year over year, which pushed down the company's dividend coverage ratio to 0.91, meaning that Williams is paying out more than its bringing in. While the distribution it receives from Williams Partners was down only slightly, off by $2 million to $513 million, the big difference was a $10 million increase in Williams' interest payments, which, when combined with paying a higher distribution, pushed its coverage ratio lower.

The other big news from Williams Companies was that it remains committed to completing its merger with Energy Transfer Equity under the previously agreed upon terms and "as expeditiously as possible." In other words, all the market rumors that the deal would fall through, or that the terms would need to be adjusted, were just that -- market rumors. While the company has some additional paperwork to file with the SEC relating to the deal, as well as obtaining shareholder approval, it appears to be on track to close the deal.

Drilling down into Williams Partners' numbers
The bulk of Williams cash flow comes from Williams Partners, so it's important for investors to look under the hood of its MLP each quarter. Its adjusted EBITDA rose 25% to $1.06 billion on the strength of $136 million in new fee-based revenue growth after expansion projects went into service. The company subsequently delivered $718 million in distributable cash flow, up 169.9% year over year. However, a big portion of that year-over-year increase was due to its merger with Access Midstream Partners.

Turning to the distribution, Williams Partners distribution coverage ratio was 0.99 times last quarter, which like its parent means it's paying out more than it's bringing in. However, the company did benefit from Williams waiving some incentive distribution rights, or IDRs, after terminating their merger agreement in favor of merging with Energy Transfer Equity. If we add in this benefit, Williams Partners' coverage ratio was a much more robust 1.39 times last quarter. Still, the IDR waivers aren't recurring, so this is just a short-term bump.

While Williams Partners grew its earnings and cash flow overall, the company's operations on a segment level did show some weakness because of its exposure to commodity prices. Here's a closer look at each segment: 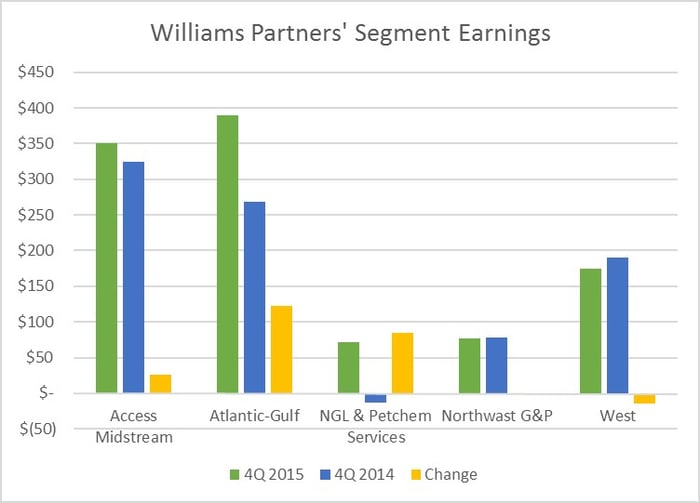 Investor takeaway
The best way to describe Williams Companies' quarter is that it was mixed. Its MLP benefited from a number of fee-based asset additions, which drove strong year-over-year cash flow growth, helping it overcome some headwinds from weak commodity prices. However, the growth didn't help Williams Companies that much because cash distributions received from its MLP were basically flat. Because of that and some other factors, its coverage ratio was weak. That's something to keep an eye on, especially until the merger to Energy Transfer Equity is closed.