Please ensure Javascript is enabled for purposes of website accessibility
Log In Help Join The Motley Fool
Free Article Join Over 1 Million Premium Members And Get More In-Depth Stock Guidance and Research
By Lee Samaha - Feb 19, 2016 at 8:33AM

Which aerospace and construction giant will outperform the other in 2016?

United Technologies (RTX 0.89%) or Honeywell International (HON 0.09%)? Both companies have heavy exposure to aerospace and global construction markets and therefore face similar headline risks. In addition, both are going through transition periods in 2016. The changes will compromise revenue and earnings in 2016 but are designed to ensure long-term earnings and cash flow generation. So which stock will win out this year? 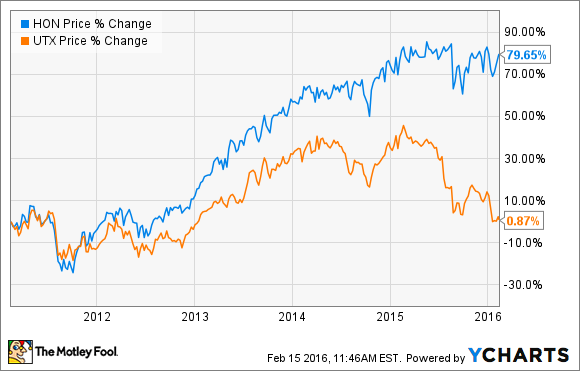 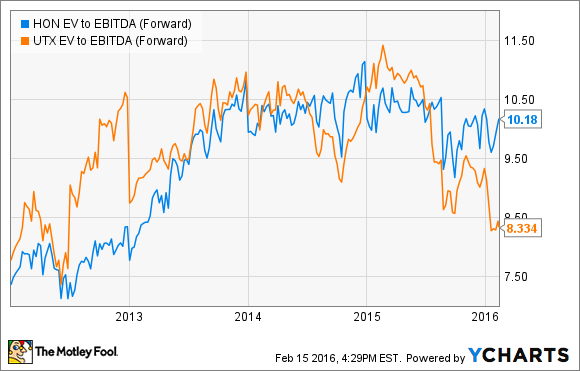 In a nutshell, United Technologies underperformed Honeywell last year because the company was forced to lower earnings estimates for two reasons:

With those issues arguably in the past now, is United Technologies now the value pick?

Risks and opportunities
Before hitting the buy button, it's worth considering the risks and opportunities facing both companies in 2016. The second chart shows forward EV/EBITDA so it includes consensus estimates, which usually follow company guidance quite closely. The two key questions for 2016 are:

I've discussed how United Technologies and Honeywell are shaping up for 2016. The key points are as follows.

It's not going to be a banner year for the company's headline numbers, and management is expecting significant operating profit declines in three of four segments. 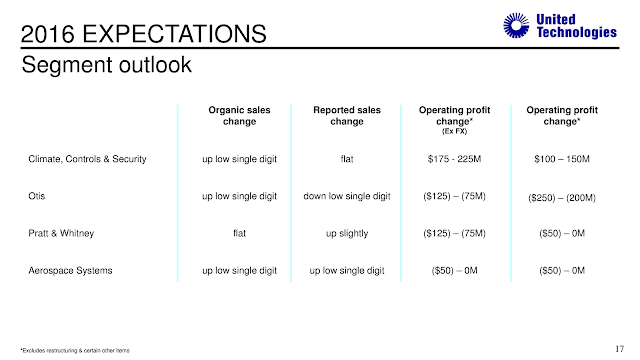 However, some of the reasons for the declines are a long-term positive:

However, you can still think of this as being a year in which the groundwork is laid for years of profitable growth ahead.

Honeywell International
The company's outlook is best summarized in a graphic from its first-quarter earnings presentation. Its core organic sales growth is similar to United Technologies', but margin expansion is leveraging EPS and free cash flow growth -- all in line with its five-year (2014-2018) plan. 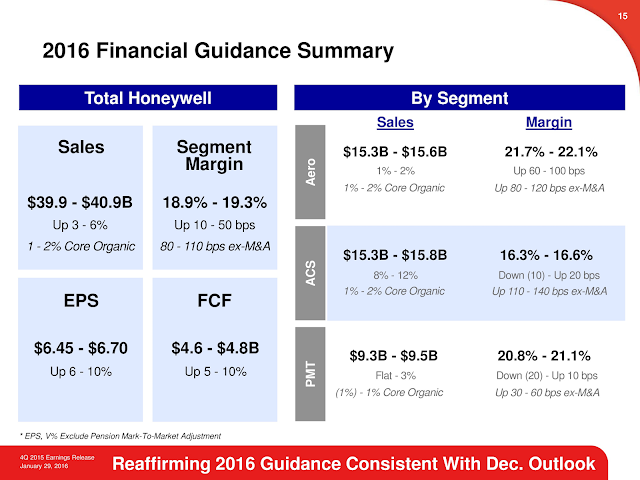 Moreover, underlying free cash flow is better than it looks. Honeywell is investing in growth as part of its plan. As such, free cash flow conversion from net income in 2015 was around 91%, but management expects to get back to a 100% conversion rate by 2017. In other words, a combination of margin expansion and relatively fewer capital expenditures in future years should see Honeywell's free cash flow expand in the future.

In common with United Technologies and General Electric (GE 0.56%), Honeywell faces some near-term headwinds in its aerospace operations -- Honeywell is giving incentives to position itself on new aerospace programs. Its performance, materials, and technologies segment also faces risks because of its oil and gas exposure, and automation and controls solutions has China exposure.

If you're worred about Boeing's recent production rescheduling, here's how Honeywell CEO David Cote answered a question on the subject on the recent earnings call:

It doesn't really have any effect on us. ... [T]he diversity of opportunity that we talk about for the company in total applies to our aerospace business, also. We're tied to basically everybody. And if you take a look at what's happening in the aerospace industry, the biggest thing for us is that flight hours increase. And flight hours last year were up 4% or 5%. They're likely to be up 4% to 6% again this year.

The pick
For United Technologies, Otis' China exposure is a concern, but Honeywell will also be hit if China's growth dives. Similarly, both have exposure to aerospace and construction, while Honeywell is more exposed to oil and gas. Undoubtedly, Honeywell has an enviable recent history of execution, and Pratt & Whitney's geared turbofan production ramp will also create challenges.

However, General Electric is also ramping up production of its LEAP engine, and its management is confident of using the industrial Internet to help reduce unit cost production in the future -- a salutary reminder that United Technologies can also use new technologies to cut engine program costs.

All told, on a risk/reward basis, I think United Technologies can outperform Honeywell from here.