Earlier this week it was revealed that Warren Buffett's Berkshire Hathaway (NYSE:BRK.B) bought a stake in pipeline giant Kinder Morgan (NYSE:KMI). It was a small stake by Buffett's standards, worth around $400 million, and could have even been purchased by one of his investment managers and not directly directed by Buffett. That said, the purchase does still follow the pattern of Buffett buys, which are companies that have a strong economic moat, throw off tons of cash flow, and are selling for a pretty compelling value. These are things that the market has seemed to overlook in recent months due to its focus on the energy market downturn and not Kinder Morgan's underlying fundamentals.

An economic moat is a term Buffett coined to refer to a business' competitive advantage over its rivals. It's what enables the company to generate strong profitability over the long-term. For Kinder Morgan, its economic moat lies in its enormous size and scale: 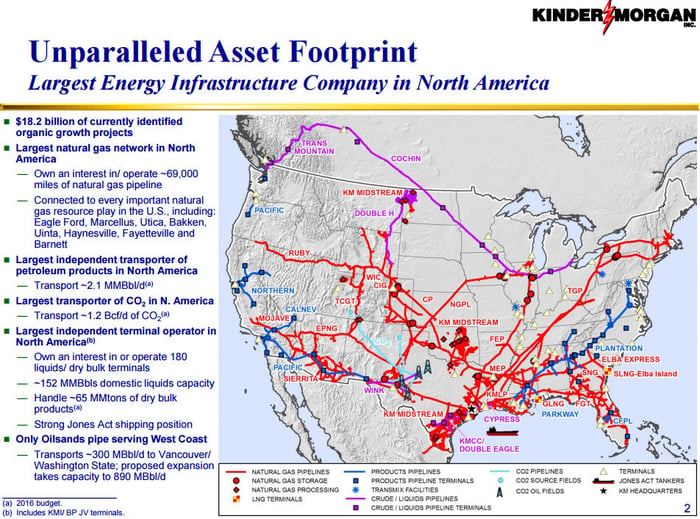 As the above slide shows, Kinder Morgan owns and operates the largest natural gas pipeline network in North America, connecting every important natural gas resource basin to market centers. Because of that it has unrivaled access to get its customer's gas to the best markets so they can fetch the best prices. In addition to that, Kinder Morgan is the largest independent transporter of petroleum products and carbon dioxide as well as the largest independent terminal network operator. That size and scale enables Kinder Morgan to meet the needs of its customers better than anyone else. Finally, it controls the only oil sands pipeline shipping oil to Canada's West Coast meaning it is the only pipeline option Canadian oil producers have to get their oil to Asian customers.

This is not only an irreplaceable asset base, but pipeline assets in general hold a competitive advantage because they're costly to build and their approval is regulated. That prevents a competitor from building a pipeline right next to Kinder Morgan, protecting its profitability.

2. Gobs of cash flow
Speaking of profitability, Kinder Morgan has that in spades. Thanks to its primarily fee-based asset footprint, the company's cash flow is very stable. As the chart on this next slide shows, Kinder Morgan's cash flow has been rock-solid through the downturn: 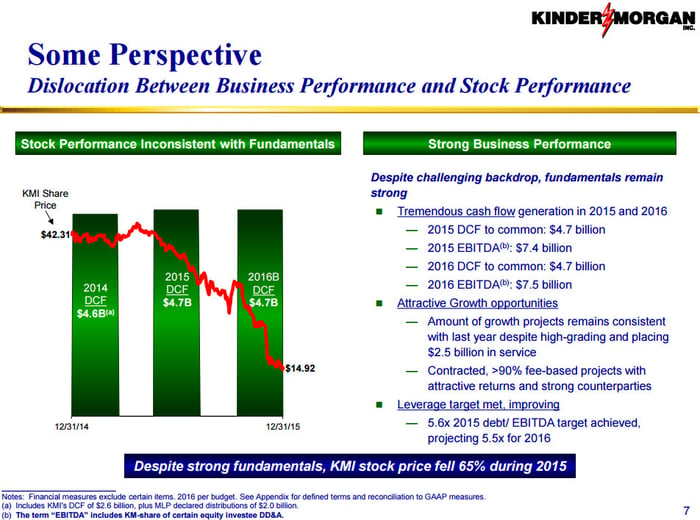 3. A deeply discounted value
Despite its economic moat and strong cash flow, Kinder Morgan's stock sold off toward the end of 2015 amid worries about its balance sheet, dividend, access to credit, exposure to oil prices, and anything else investors could think to fret over. In doing so, investors pushed the stock down to such a degree that on a price-to-cash flow basis Kinder Morgan is selling for just over seven times cash flow: 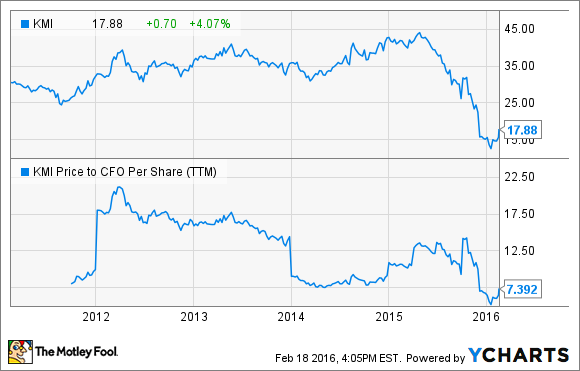 That's an excellent value for the company on a historical basis, especially since it combined with its MLPs at the end of 2014. Further, seven times cash flow is an excellent price to pay for an entrenched business like Kinder Morgan.

Investor takeaway
The market sees Kinder Morgan as a deeply indebted oil company and therefore sold it off. While it's true that the company produces some oil and does have a lot of debt, the vast majority of its asset base consists of irreplaceable pipelines that combine to form a very strong economic moat enabling the company to produce steady cash flow irrespective of the price of oil and gas. Those traits, and the company's discounted value, are qualities that Warren Buffett seeks in an investment, which is why it's not all that surprising to see his company recently snap up some shares of the pipeline giant.