Two companies facing troubles, but one's troubles are so much less serious...

Vale (NYSE: VALE) and Silver Wheaton (NYSE: SLW) both operate in the commodity markets and are facing some outside-the-norm troubles right now. At the same time. they are fundamentally different businesses and the risks are on a different scale. Here's the reason one is a better option.

Commodity downturn
Vale and Silver Wheaton are both tied to the commodity markets. But there's a key difference. Vale is a miner, which means it owns and operates mines, taking on all the risks and costs associated with that venture. Silver Wheaton is a streaming company, which means it provides cash up front to miners for the right to buy future silver and gold production at reduced costs. It doesn't do any of the dirty work or bear any of the risks of running a mine. In fact, while Silver Wheaton's results have been hurt by falling prices, it's still a profitable business because its silver and gold costs are so low (around $4 an ounce for silver and $400 an ounce for gold). 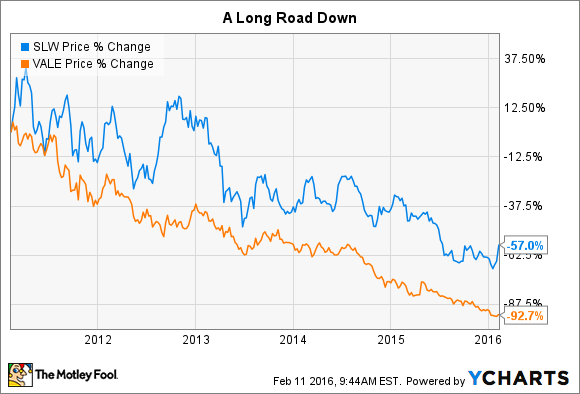 The mining and streaming businesses are symbiotic. For example, Silver Wheaton actually provided Vale with $900 million last year, helping the miner shore up its balance sheet, in exchange for the right to buy gold from one of its mines at roughly $400 an ounce. That sounds like a bad deal for Vale, but the miner needs cash, so it's really a win/win for both companies -- and gold isn't one of Vale's major markets.

Which brings up the first reason Silver Wheaton is a better option today than Vale. The commodity market downturn has put Vale in a precarious financial position. It's been selling assets and cutting spending to cope. Silver Wheaton has used this downturn to grow its business. It's getting better today, with no need to wait (perhaps hope) for a commodity upturn to save the day. Silver Wheaton may not be as profitable as it once was because of lower commodity prices, but that's a vastly different situation than Vale, which looks like it's simply trying to survive.

Problems, problems, problems
But merely surviving a commodity downturn isn't Vale's only trouble today. It's half owner of the Samarco Mine in Brazil, where mining waste broke through a containment dam. People died and there was material property damage. It's pretty bad, and it occurred at a time when Vale is trying to conserve cash. Although Samarco is, technically, a separate company, Brazil is holding Vale and 50% co-owner BHP Billiton (BHP -4.42%) responsible.

Brazil is looking for $5 billion from the pair, but that number could simply be a starting point. So not only is Vale struggling in an out-of-favor mining industry, but it also has a big company-specific problem on its plate. That said, Silver Wheaton has some troubles of its own.

Silver Wheaton is currently fighting the Canadian government over how much it owes in taxes. Canada says the streaming company owes it something on the order of $400 million in back taxes, interest, and fines. The company's net income was only $200 million in 2014 and $160 million (removing an impairment charge) through the first nine months of 2015.

In other words, even though Silver Wheaton believes it doesn't owe any back taxes, this is a notable issue if Canada decides it does owe the money, which is one of the reasons Silver Wheaton's shares have been struggling of late, aside from falling silver and gold prices. But this problem is orders of magnitude less onerous than what's facing Vale and the Samarco Mine.

In fact, even if Silver Wheaton loses its tax case, it should be able to come up with the cash without too much pain. (It could probably pay off that tab with its revolving credit facility, if it had to.) Vale, on the other hand, already in a position of weakness, might need some very expensive outside financial help to deal with the costs its facing. In the end, that could make an already bad industry downturn even worse for the giant iron ore miner.

Going against the grain
Vale and Silver Wheaton are most appropriate for contrarian investors. Both operate in the out of favor commodity markets, and each has its own company-specific cross to bear. But the combination of an industry downturn and a mining disaster make Vale a highly risky investment option today. Sure, there may be a lot of upside if everything works out in Vale's favor. But what if it doesn't?

That's why Silver Wheaton is the better option today. It is getting stronger during the commodity downturn by expanding its low-cost and still sustainable businesses model. Even if it loses the Canadian tax case, it's still likely to be in a better position to handle the hit and move forward without too much pain. And that story only gets better if silver and gold prices continue to head higher, as they have been in the face of market turbulence in the early part of 2016.