Please ensure Javascript is enabled for purposes of website accessibility
Log In Help Join The Motley Fool
Free Article Join Over 1 Million Premium Members And Get More In-Depth Stock Guidance and Research
By Tim Beyers - Feb 20, 2016 at 11:00AM

Not nearly as much as the studio would like, which could explain the growing rift between these two Hollywood titans.

After five days that included a record-setting opening weekend, Deadpool has delivered an estimated $65.4 million in box office profits for 21st Century Fox (FOX) (FOXA). Impressed? You should be, and yet the figure is also ironic.

In racking up the biggest domestic opening weekend ever for an R-rated film -- $132.4 million vs. just $91.8 million for The Matrix Reloaded, which set the prior record in 2003 -- Deadpool appears to have already earned more box office profit than X-Men Origins: Wolverine, a much-maligned mess of a film that finished its theatrical run with an estimated $64.3 million in profits.

A do-over done right
Fans may see that as sweet justice. Deadpool star Ryan Reynolds played a very different -- and widely loathed -- version of Marvel's merc with a mouth in Origins. Specifically, Reynolds' Deadpool appeared with his mouth sewn shut and shooting laser-like beams from his eyes. Reynolds himself referred to the debacle in an impromptu interview with Origins star Hugh Jackman during the actor's press junket for Eddie the Eagle.

It's easy for Reynolds to poke fun now that he's the star of what looks to be an entirely new franchise. Fox, too, can rest easier knowing there will be plenty of funding to invest in a sequel.

Yet Deadpool is a Marvel Comics character. Shouldn't Walt Disney (DIS 3.30%) also be profiting? Yes, but the numbers aren't likely to be as good as you think. A 2001 lawsuit explains why.

A steal of a deal
Long before Marvel was part of Disney, its executive team inked a deal with Fox for the rights to the X-Men family of characters. That deal, first signed in 1993, was so broad as to allow Fox the right to make films featuring the origin stories of all characters found in the X-Men comic books.

A separate clause gave Fox rights to depict "all other elements" relating to the X-Men property and characters. That includes Deadpool, who first appeared in the X-title New Mutants.

Fox also secured a portion of the resulting merchandising revenue earned from X-films, in addition to rights to animated feature films based on the characters. In return, Marvel received $1.6 million for live action rights, plus another $1 million for animated rights, plus a percentage of the theatrical gross for all X-films. Most of the details of the agreement can be found in the text of a legal filing in which Fox accuses Marvel of breach of contract for attempting to make a TV show featuring some of the X-Men without the studio's consent or involvement.

I'm not clear on the results of that case. Yet I'm also not sure it matters. Fox and Marvel will have to negotiate the particulars if an X-Men TV show is ever to be developed. In the meantime, the essential elements of the 1993 agreement between the two companies appears to be intact. Fox is going to reap hundreds of millions from Deadpool as a result, while Disney collects scraps.

Maybe that's overstating it. But according to the legal filing, Fox estimated its profits on 2000's X-Men at roughly $160 million vs. just $6 million in "back-end contingent compensation" for Marvel, or equal to just more than 2% of the film's worldwide gross of $296.3 million.

Presuming not much has changed -- and there's no evidence that it has -- Disney might earn $16 million or so if Deadpool grosses $800 million globally, roughly triple its opening weekend haul.

Comic book conflict
Or maybe not. We can't know for sure, because neither Fox nor Disney had responded to requests for clarification as of the time of publication. In the meantime, Marvel is waging what amounts to open warfare in the comic book market by cancelling Fantastic Four as an ongoing series and de-emphasizing the X-Men, both of which are Fox cinematic properties.

Changes to the X-titles are particularly interesting in that they come as Marvel is elevating a lesser-known group of supers called the Inhumans. You can see it in the positioning. 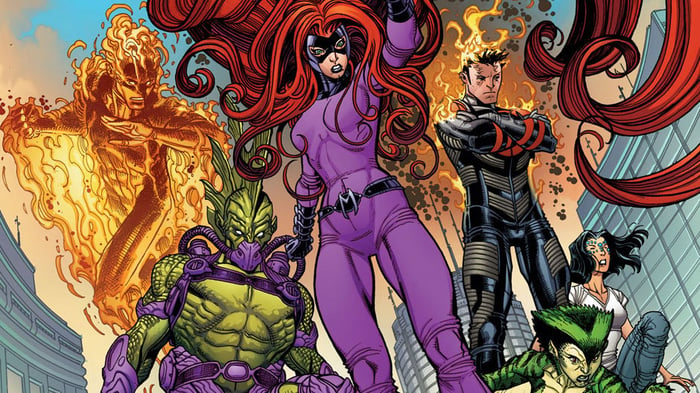 The Uncanny Inhumans is now a signature comic book series for Marvel, and a thinly disguised attempt to make the X-Men a secondary property. Source: Marvel Entertainment

The Uncanny Inhumans offers the most intriguing example, because it all but shadows what had been Marvel's signature mutant title, Uncanny X-Men. More than 400 X-Men issues published between 1978 and 2011 shipped with "Uncanny" emblazoned on the cover. Now, it's the Inhumans who get the honor, if you can call it that.

They're also heavily featured on Marvel's Agents of SHIELD television show, and come 2019, will get their own place in the Marvel Cinematic Universe -- just the sort of treatment you'd expect for a property that Disney owns outright. You put marketing dollars into what makes money.

Deadpool is going to make plenty of cash, but like X-Men and all the other X-films that followed, it'll be Fox that nets the lion's share of the profits, from the box office to the Blu-ray counter. For Disney, it's the rare vulnerability in an otherwise super-powered franchise machine.

Now it's your turn to weigh in. Did you see Deadpool? Would you rather see Disney own the movie rights, or would you prefer to see Fox keep making X-films? Keep the conversation going in the comments section below.