Please ensure Javascript is enabled for purposes of website accessibility
Log In Help Join The Motley Fool
Free Article Join Over 1 Million Premium Members And Get More In-Depth Stock Guidance and Research
By Ryan Vanzo – Feb 20, 2016 at 9:45AM

You can buy cheaply into one of Seth Klarman's best ideas, but only if you're as patient as he is.

At first glance, Cheniere Energy (LNG 0.60%) doesn't look like your typical value play. The company has experienced losses every year since 2000, with nearly $7 billion in negative free cash flow over the last 12 months. Its balance sheet doesn't look any better, with a total debt of $16 billion versus a market cap of just $6.6 billion.

Many investors then may be surprised to learn that legendary value investor Seth Klarman, founder of The Baupost Group, has made Cheniere Energy one of the largest bets of his career. According to his most recent regulatory filings, Klarman now owns roughly 37 million shares, or 15% of the entire company. His fund started buying shares back in 2014 at around $48. Since then, the position has grown every single quarter, buying all the way up to $76 a share.

Lately, Cheniere's stock has been in a free fall, down 50% in the last 90 days alone. Klarman has taken advantage of the drop, increasing his position in December by 63% at an average price of $37. With the stock now at just $23 a share however, is this a chance to buy into the best idea of one of the most successful investors in the last 20 years, all at a price significantly less than what he paid?

Cheniere is a very long-term play
The entire thesis regarding Cheniere Energy stems off an arbitrage play that is expected to last decades: the price differential between North American and Asian natural gas prices.

The explosion of fracking has hit U.S. natural gas prices significantly harder than oil prices. While oil has experienced a rough 24 months, domestic natural gas prices fell 75% back in 2009 and never recovered. Today, prices are around $2.10 per million BTU, around the same level it was back in 1998.

The idea that North American natural gas prices will remain depressed makes sense. The U.S. Energy Information Agency projects that the country's natural gas production will grow nearly every year through 2040. Meanwhile, after decades of imports, the agency expects the U.S. to start exporting its massive natural gas production. That's where Cheniere Energy comes in.

Due to structural differences, natural gas prices are typically 2-3 times higher in Asia than the U.S. This should continue. According to the International Energy Agency, Asian demand for natural gas will nearly triple by 2030. Structural issues also exist in the European Union, where natural gas typically trades at a 100%+ premium to U.S. prices. . Exporting cheap, plentiful North American natural gas to higher-priced Asian and European markets is an arbitrage opportunity that could last decades.That's why Cheniere Energy has spent $30 billion over the past few years to build export terminals with enough capacity to make it one of the world's largest LNG exporters. Shipments are expected to start this year. 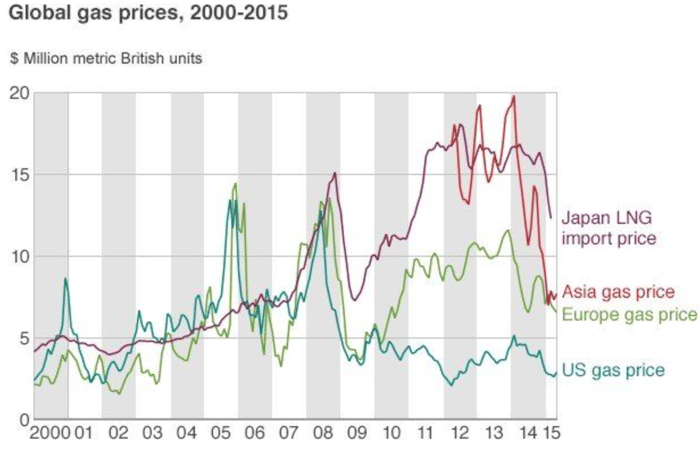 A risk worth taking
The process of building out its massive export infrastructure is what causes Cheniere's financials to look messy, specifically in terms of negative free cash flow and mounting debt. Once its up and running this year, things should turn around quickly. Customers are already flocking to the company's impressive, long-term value proposition, with nearly 90% of its export capacity already contracted. These 20-year contracts (with fixed terms and no price reopeners) will generate $4.3 billion in fixed fees per year that are not tied to commodity prices.

With its current contracts alone, management anticipates generating EBITDA of $2.1 billion a year by 2021. At full capacity, it could generate $3 billion in annual EBITDA. At that level, shares would only trade at 6.7 times EV/EBITDA. That's an extremely attractive valuation for a company with a significant portion of earnings guaranteed for the next 20 years. The long-term nature of Cheniere's business may only make shares suitable for very patient investors however, given the company doesn't expect to fill its current constructed capacity for another 5 years. The viability beyond that relies on macroeconomic predictions that stretch decades. In any one year, Cheniere's stock could swing dramatically until the fundamentals start to underpin the company's true value. 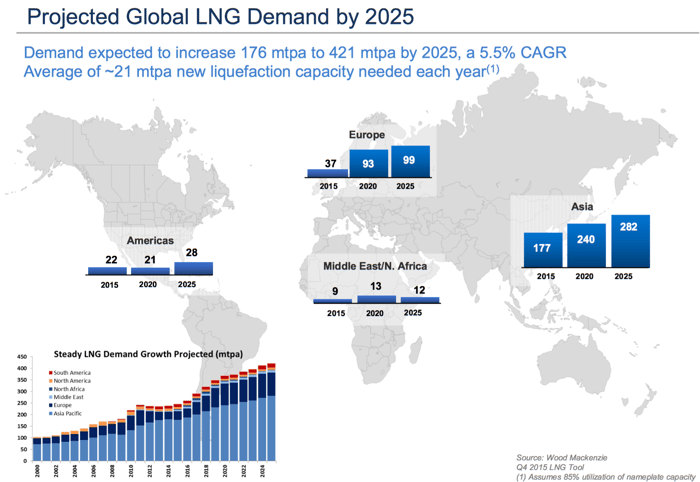 Another famous investor is also getting in on the action
While shares may remain volatile until Cheniere gets its business up and running, other major investors are taking note of the company's long-term appeal. After recently upping his stake, Carl Icahn now owns about 33 million shares, nearly matching Klarman's massive stake. Looking at Cheniere's low-risk business model and falling valuation, it's no wonder these two gurus are buying big.