February isn't typically known as a hot month, for either the outdoor temperature or the stock markets. Yet so far this year, it's been a busy time for dividend raises, with a flood of them inundating us since Feb. 1.

Last week was particularly alive with distribution increases, so much so that I don't have the space to delve into those from certain heavyweight blue chips -- like United Parcel Service, for example, or Time Warner. No, I'm limited to only three stocks, so I've pared down a long list to:

Lifting the distribution is a habit for the company. It has paid an increasingly growing annual dividend every year since rolling it out in 2010. Over that stretch of time, it has advanced from $0.15 per share to the present level; in percentage terms, the recent raise was the highest in its history.

This, despite a fourth quarter in which revenue and net profit not only both dropped on a year-over-year basis, but came in under analysts' estimates. Fiscal year revenues also dropped, although net profit for the time period was slightly higher.

Although the company operates in a notoriously volatile segment dependent on big hits, I think it'll be able to at least sustain its new dividend. In spite of the challenges of its market, it has been consistently profitable of late, and produces more than enough free cash to fund the distribution. 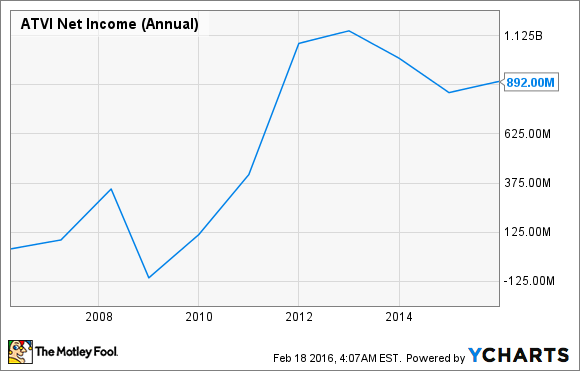 Activision Blizzard's annual dividend is scheduled to be paid on May 11 to shareholders of record as of March 30. At the current share price, it yields just under 0.9%. This is well below the current 2.3% average of stocks on the S&P 500 index.

That, combined with a fresh $5 billion increase in its share-buyback authorization, is part of a recently announced initiative to return $25 billion of capital to shareholders

These moves should make shareholders happy, particularly the activists who had been prodding the company -- John Paulson and Carl Icahn.

In addition to the lifted dividend and expanded stock-buyback program, the two have essentially put aside their differences with company management in return for certain concessions (like a board seat apiece for their associates).

As for the future of the dividend, I'd imagine that with Paulson and Icahn involved, it'll at least be sustained for now. But those two have been agitating for a breakup of AIG into its component parts, so it's anyone's guess how (or even if) that will ultimately shake out. This makes the long-term future of the payout cloudy, to say the least. 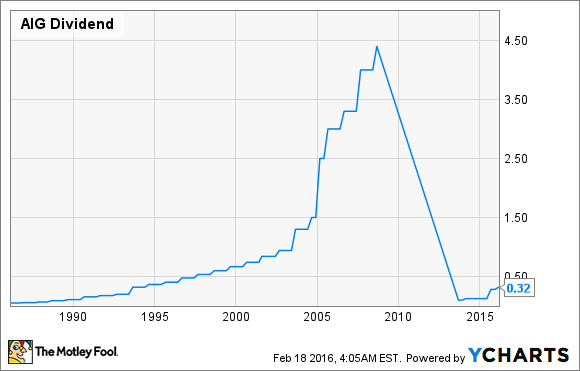 The new dividend is to be paid on March 28 to stockholders of record as of March 14. At AIG's current share price, it yields 2.4%.

Cisco Systems
Our champion raiser in percentage terms for this installment is IT networking kingpin Cisco Systems (NASDAQ:CSCO), taking the crown with a sturdy 24% increase. The company's new quarterly payout will be $0.26 per share.

Cisco is a serial raiser, having lifted its distribution at least once a year since inaugurating it in early 2011. With the latest hike, the company has now added $0.20 per share to it over that time.

There's little reason why it shouldn't have done so in this latest instance. Cisco's fiscal Q2 2016 net profit rose a pleasing 31% year-over-year to $3.1 billion, on the back of revenue that was basically flat at just shy of $12 billion. And this was during a quarter that saw the company close several promising acquisitions. 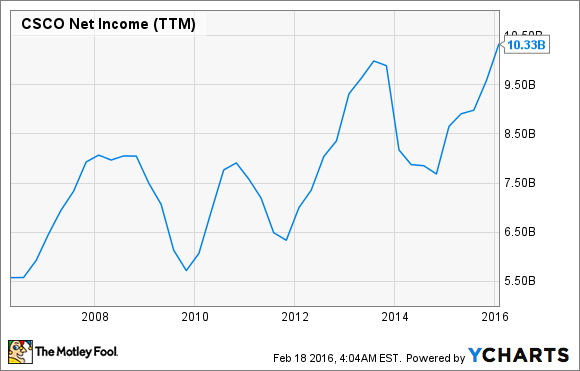 Meanwhile, Cisco's business continues to pump out cash. Even at this fairly generous level, the new dividend is well within the company's financial means. (In Q2, total dividend payments were less than one-third the free cash flow tally). I can't imagine that this will change in the foreseeable future, so I'd expect the payouts to keep heading north.

Cisco's upcoming distribution is to be handed out on April 27 to holders of record as of April 6. It yields 3.9% based on the most recent closing stock price.