Please ensure Javascript is enabled for purposes of website accessibility
Log In Help Join The Motley Fool
Free Article Join Over 1 Million Premium Members And Get More In-Depth Stock Guidance and Research
By Matthew DiLallo – Feb 21, 2016 at 8:03AM

The energy market has taken a turn for the worse in recent months, heightening concerns that this will have an even deeper impact on energy midstream companies like ONEOK (OKE -1.42%) and ONEOK Partners (OKS). Those worries are a big reason why both companies have slumped since the end of the third quarter: 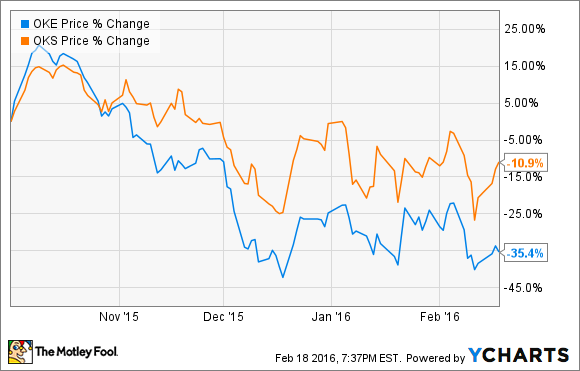 Despite what the market thinks, ONEOK and ONEOK Partners have consistently said that they can manage any impact from lower oil and gas prices. That said, talk is cheap these days and the market wants to see the numbers backing up these assessments. Those numbers, at least for the fourth quarter, will be released after the market closes on Monday. Overall, there are a few things investors will want to keep an eye on when reviewing that report.

First, let's review
Before we get into that report, let's take a quick moment to review the third quarter. Last quarter, ONEOK reported a pretty solid quarter with distributions received from ONEOK Partners up 21.9% to $197.5 million. Because those distributions are the company's main income source, it's important for investors to take a close look at what ONEOK Partners does each quarter. Here's a quick snapshot of its three segments:

Volume growth at the natural gas liquids segment, due to growing Permian Basin NGL volumes and the acquisition of the West Texas LPG pipeline system, fueled strong year-over-year net operating income growth. This helped offset weakness in its natural gas gathering and processing segment, which has been affected by direct exposure to commodity prices.

A look at ONEOK Partners' natural gas gathering and processing segment
Investors will want to check out the natural gas gathering and processing segment first in the fourth quarter. After a weak showing last quarter, they will want to see some improvement as the company continues to restructure many of its percent-of-proceeds contracts to fee-based ones. The goal is to increase that segment's fee-based margin from 50% up to more than 70% in 2016. Its ability to restructure these contracts as well as grow its volumes will help it mute the impact from weak commodity prices.

One other thing to watch here is the Lonesome Creek processing plant, which was expected to be complete in November. That project, which was to cost between $550 million to $680 million, is one of its larger undertakings so it will be important to see that it was completed on time and that it started to deliver during the quarter.

Are there any changes to guidance?
Back in December, ONEOK and ONEOK Partners announced their financial guidance for 2016. ONEOK guided for cash available for dividends of $675 million and a dividend coverage ratio of 1.3 times. Meanwhile, ONEOK Partners' guidance was for distributable cash flow of $1.39 billion and a coverage ratio of around 1.0 times, meaning it was forecasting to pay out every penny it earned.

That guidance, however, was based on oil prices rising to $40 to $45 per barrel in 2016, which is a long way from the current $30 oil price. Because of that, investors should see if there are any changes to that guidance, particularly relating to the distribution. One other thing to focus on are comments made by ONEOK CEO Terry Spencer, who in the guidance press release said, "If needed, ONEOK continues to be well positioned to provide financial support to ONEOK Partners." It's possible that ONEOK could take a pay cut and receive a smaller amount in distributions than it's due in order to support its MLP through the downturn so that it doesn't have to reduce its distribution to outside investors. Given ONEOK's strong projected dividend coverage ratio of 1.3 times, it could stand to take a cut and still maintain its current payout rate.

Investor takeaway
There is a lot of nervousness in the energy sector right now because oil and gas prices remain much weaker than had been expected. That's cutting into not only the profitability of producers but also midstream companies like ONEOK Partners that have some direct exposure to those prices. Its ability to mute that exposure by converting more of its contract to fee-based, as well as bringing more fee-based assets on line, are vitally important to its ability to sustain its current distribution through the downturn.

Matt DiLallo has no position in any stocks mentioned. The Motley Fool owns shares of and recommends ONEOK The Motley Fool recommends Oneok Partners. Try any of our Foolish newsletter services free for 30 days. We Fools may not all hold the same opinions, but we all believe that considering a diverse range of insights makes us better investors. The Motley Fool has a disclosure policy.