Despite being an iconic American brand that has also conquered the world, Coca-Cola (NYSE:KO) has struggled at times.

Even though the company has diversified well beyond its core soda products, it has still suffered in recent years as Americans specifically have become more concerned about calories as well as sugar and other additives in their drinks. Even Diet Coke, which for a while was a steady source of growth, has declined for a decade, with no sign of a turnaround, according to Fortune.

And the diet-pop conundrum is not just a problem for Coke. Rival PepsiCo (NASDAQ:PEP) has seen similar declines. In that case it's obviously not calories, it's more a case of the public being wary of artificial sweeteners.

"There does appear to be a little bit of a stigma with artificial sweeteners," NPD Group analyst Darren Seifer told Fortune. "It seems impure to consumers."

That's the type of backlash and risk that's manageable in one or even a few product segments at a time, but could present a risk to Coca-Cola (or Pepsi) stock if multiple issues happen all together. 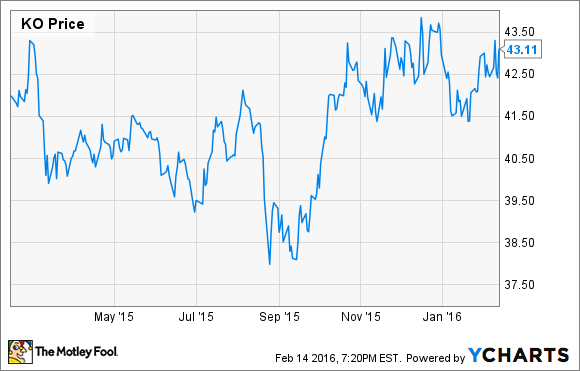 Coke had its ups and downs over the past 12 months. Source: YCharts.com.

What risks is Coke facing?
Coca-Cola saw a 4% decline in revenue in 2015, showing that even though it's in no way just a soda company -- Coke's many brands include Powerade, Dasani, Odwalla, Fuze, and Minute Maid -- it's still vulnerable to changing consumer tastes and the weakness in its core soda products. But, while the revenue drop was not happy news for investors, global volume was up 2% for the year.

Coke is a huge company which sells pretty much everything you can think of in the non-alcoholic beverage space. That makes the beverage maker, which is in the process of purchasing many of its bottlers to better control manufacturing, packaging, and shipping of its products, fairly resistant to changing tastes.

That said, the company operates in a next-big-thing industry where little companies can explode quickly. Coke has often had to buy its way into emerging beverage categories either by launching its own brands or buying successful new players.

For example, the company had to create Powerade to compete with Gatorade (which Pepsi now owns). It also had to buy stakes in Keurig Green Mountain to get into the single-serve coffee market and  Monster Beverage to make up for its weakness in energy drinks. In addition, the company has created lines like Dasani water, various energy drink brands, and has bought its way into the iced tea market.

Coca-Cola also runs a risk of bad publicity regarding packaged drinks in general. That could be more negative publicity for sugar or even a renewed push toward making your own beverages.

Coke is not really at risk
While new categories, changing tastes, and bad PR can hurt Coke in the short run, the reality is that the company has the money and distribution network to weather any storm. If drinking bubble tea becomes all the rage and Coke lacks a bubble tea brand, it can simply buy one and push it through its well-established sales channels.

Because the beverage game is largely about shelf space and distribution, it's hard to see any competitor or change in consumer desires derailing Coke for long. Yes, having to buy said imaginary bubble tea brand or create its own costs money, but Coke can afford to roll with those kinds of punches.

If a new trend emerges, Coca-Cola can buy in or force its way in. That means that while market conditions and fickle consumers may cause bad quarters, or maybe even bad years, in the long run, the company is well set up to recover from almost any setback.

It's hard to see Coke stock as risky as a long-term hold because the company controls store shelves, restaurants, and a large part of how beverages get into people's hands. As needs change, that means the company really just has to shift its product mix, and any risks are relatively short in duration.