This chip giant's losing streak in the market for mobile processors remains unbroken.

Intel (INTC 0.39%) announced its next-generation stand-alone modem aimed at smartphones, tablets, and personal computers known as the XMM 7480. The naming is a bit of a surprise as documents leaked a while ago suggested that the follow-on to the company's XMM 7360 would be called the XMM 7460. No matter; that's not what's important.

What's important is that the XMM 7480 is an extremely underwhelming, uncompetitive solution that does not stand a chance in the marketplace for high-performance stand-alone modems. Given that Apple (AAPL 0.37%) is essentially the only high-volume mobile customer that uses stand-alone modems, this lack of a competitive solution on Intel's part means that the iDevice maker is likely to continue to exclusively use competing solutions from Qualcomm (QCOM 1.09%).

To put it bluntly, it looks like game over for Intel's stand-alone modem efforts.

Falling further behind Qualcomm
The XMM 7480 modem that Intel just announced features the following specifications (reproduced from Intel's product brief on the part): 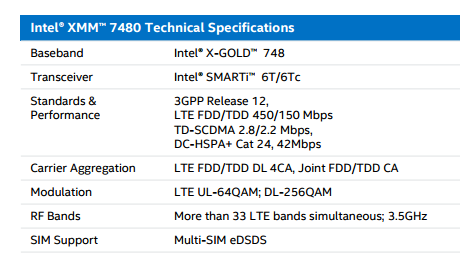 This might look like cryptic mumbo-jumbo, but here are the key things to notice. The standards supported are LTE FDD/TDD, TD-SCDMA, and DC-HSPA+. Note the lack of CDMA/EV-DO, a feature that is practically required if Intel wants its modems to play nice on networks that require the standard (such as Verizon (VZ 0.48%) and Sprint (S)) and ultimately to win Apple's iPhone.

Another thing to notice is that even though the modem supports four carrier aggregation on the downlink (generally speaking, the larger this number, the higher the download speeds the hardware can support), the maximum rated download speed is just 450 megabits per second.

At this point I'm not sure why Intel isn't getting better download speeds as the hardware required to go higher should be there (4 carrier aggregation, DL-256QAM modulation). If I had to guess, I believe the XMM 7480 will get the same treatment that the XMM 7160 got and receive a firmware update down the line to improve its download speeds.

But, by then, Qualcomm will have won its designs, shipped product for revenue, and will probably be sampling modems that will be even further ahead of what Intel is doing.

Time to close up mobile shop, Intel
At this point, Intel just doesn't seem to have competitive modem technology, meaning that its stand-alone modems don't stand a chance at winning a high-profile customer like Apple.

Although Intel could hypothetically use its under-dressed modems, integrated with applications processors, Intel is perpetually behind there, too. Among Intel's announcements was not a single mention of the highly delayed SoFIA LTE, nor any information about the company's 14-nanometer SoFIA LTE 2/SoFIA MID products.

Indeed, Mobile World Congress 2016 isn't over yet, but last year Intel mobile chief Aicha Evans said that "by this time next year" (it's that time now) the company should be giving details of its 14-nanometer SoFIA products or else the company will "have a problem" and that she "might not even be [with Intel]."

Intel's mobile group has never demonstrated that it can put out competitive products in a timely fashion, and its announcements at Mobile World Congress this year show that this hasn't changed.

It's time for Intel to put an end to the egregious waste of shareholder dollars known as the "Mobile and Communications Group."