Please ensure Javascript is enabled for purposes of website accessibility
Log In Help Join The Motley Fool
Free Article Join Over 1 Million Premium Members And Get More In-Depth Stock Guidance and Research
By Jeremy Bowman - Feb 22, 2016 at 11:30AM

Low gas prices have helped push tobacco shipments up for the first time since 2006.

Cheap gasoline has an outsized effect on cigarette sales because smokers tend to have lower incomes than the average American, and cigarette purchases often take place at gas stations. The savings at the pump can trigger an immediate purchase in the convenience store afterward.

Reynolds American (RAI), the parent of Camel and Newport cigarettes, even went as far as to say that last year was the best for the industry since 1996.

Tobacco stocks have bucked the downward trend in the market over the past year, and Reynolds shares in particular have soared following its merger with Lorillard. 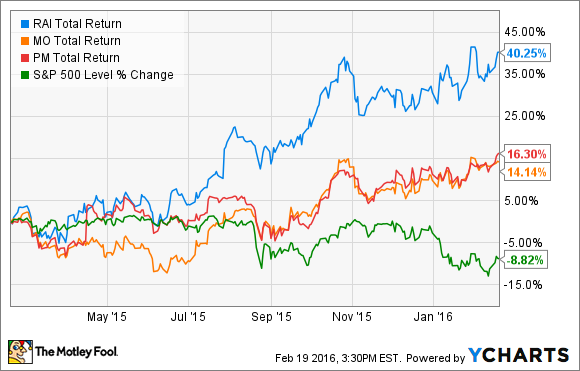 Big soda would like to get a chunk of those gas savings as well. Both products have seen declining consumption due to health concerns and both are readily purchased at convenience stores after getting gas. Convenience store sales increased 5% in the fourth quarter, but Coca-Cola (KO 2.34%) and PepsiCo (PEP 1.64%) don't seem to be benefitting from the windfall.

Still beverages have been a brighter area for the soda giants as Coke saw a 5% increase in non-carbonated, which include bottled waters, iced teas, and sports drinks like Powerade, but it's clear that Coke and Pepsi are not getting the same bump in spending that rival businesses are. Restaurants and bars in the US, a huge customer bloc of Coke and Pepsi, saw spending jump 8% last year, a leap that many attributed to savings at the pump. By comparison, retail sales excluding gasoline were only up 3%.

Other beverage companies have also seen accelerated growth. Monster Beverage (MNST 2.04%), the energy-drink maker in which Coke holds a stake, posted its best revenue growth in more than three years in its most recent quarterly report.  In Starbucks' (SBUX 3.76%) most recent quarter, same-store sales in the Americas jumped 9%, following a 7% increase in fiscal 2015.

It seems, then, that Americans are spending more money on beverages, but they're choosing ones like energy drinks and coffee instead of soda.

Coke and Pepsi know this. That's why they've gone on shopping sprees to diversify away from their core namesake drinks. Coke has made significant investments in Monster and Keurig Green Mountain, and has taken over brands like Zico Beverages, a coconut water brand that it acquired in 2013, and a Chinese protein-drink brand in 2015. Pepsi, meanwhile, has focused more recently on acquisitions in its food and snacks divisions as it also owns Quaker and Frito-Lay.

But there's evidence that that strategy is getting harder to implement. Legacy food companies are now finding that the asking price for fast-growing alternative brands have shot up and that more established companies are growing too slowly.

Pepsico CEO Indra Nooyi said at a recent conference, "If you can find a good company to buy, let us know. The small ones are too expensive. Big ones have their warts."

Tobacco vs. soda
While cigarettes and soda share a number of similarities, the key difference between the two is that tobacco has no good substitute. For a cash-strapped smoker with extra money to spend, it makes sense that they'd plunk down a few bills for smokes after filling up. Soda, on the other hand, has plenty of substitutes. Americans who have reduced their consumption of the fizzy beverages, especially diet drinks, have moved on to coffee, energy drinks, or just simply water.

In the current market environment, defensive stocks like tobacco beverages have an additional appeal as both sectors have barely flinched at the recent downturn. Low oil prices also seem likely to persist, which will keep the discretionary income flowing and, possibly, the market volatility. Under those circumstances, tobacco's the better poised to profit, making it the better bet of the two sectors.