HP Inc. will report results for its first full quarter since it hived off its enterprise business.

Hardware manufacturer HP Inc. (HPQ -2.76%) reports results for its fiscal first quarter, which ended Jan. 31, after Wednesday's market close. This is the first full quarter during which HP has operated independently of its enterprise business, which it spun off into Hewlett-Packard Enterprise Co. (HPE -2.00%) on Nov. 2. In other words, there are no more sexy enterprise activities to distract analysts and investors from what remains a good franchise but one that operates in a very difficult market.

A stabilization in printing systems revenue could be a catalyst for share gains.

HP must prove itself
The market already seems to have cast its vote: The graph below shows how the shares have performed versus those of Hewlett-Packard Enterprise since the spin-off date. 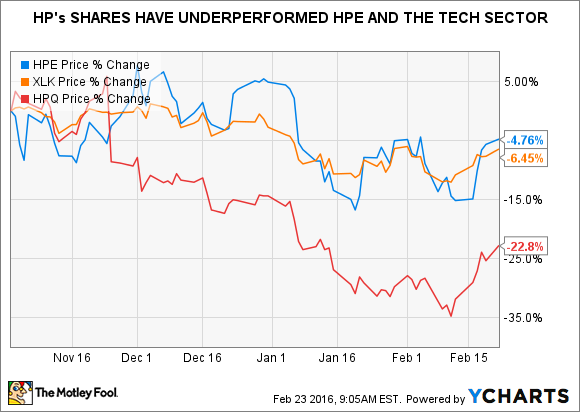 What to watch: Revenue growth
The top line will be critical, and, more specifically, top-line growth. When one speaks to HP, one is forced to use the term "growth" algebraically (i.e., growth can be positive or negative); indeed, HP has managed to produce positive year-over-year growth in just two of the last 16 quarters.

That weighs mightily on sentiment. It is always going to be more difficult to convince investors to bet on a declining business, regardless of the price. (This same issue has been weighing on the shares of another technology institution, International Business Machines Corp.)

As I argued in this article, the printing segment -- which has recorded 17 consecutive quarters with declining revenue -- will bear particular scrutiny.

A new CEO but hardly untested
This is HP CEO Dion Weisler's first opportunity to lead a conference call without sharing the spotlight with former HP and current Hewlett-Packard Enterprise CEO Meg Whitman, who is well-known in Silicon Valley and on Wall Street.

As such, this is Weisler's opportunity to present his vision for the company he now leads, as well as a narrative for Wall Street. My review of his background and accomplishments for this short profile left me with a very favorable impression of this highly capable proven operator.

Weisler is a chief executive and an Australian, to boot, so you should expect a sunny outlook for HP's prospects (in relative terms, at least) -- but not one that is completely out of touch with the reality of the marketplace. By all accounts, this is not a "helicopter view" executive. Weisler likes to remain well-grounded in the business.

Speaking at the company's analyst day last September, he commented that "executing on our strategy will produce reliable returns and cash flows while also having the opportunity for long-term growth." The first part of the sentence suggests Weisler understands HP's investor appeal, but I'll certainly be curious to hear more about the "opportunity for long-term growth." Specifically, what are his plans for developing the 3D printing business?