Please ensure Javascript is enabled for purposes of website accessibility
Log In Help Join The Motley Fool
Free Article Join Over 1 Million Premium Members And Get More In-Depth Stock Guidance and Research
By Daniel B. Kline – Feb 24, 2016 at 6:02PM

The company has struggled to complete its merger with rival Office Depot.

Staples (SPLS) spent much of 2015 trying to win federal regulatory approval for its proposed acquisition of rival Office Depot (ODP -1.43%).

The uncertainty surrounding that deal, which was rejected by the Federal Trade Commision in December, has been a drag on the company's stock for the last 12 months. Staples shares closed at $17.01 on Feb. 17, 2015, and sat at only $9.16 at market close a year later on Feb. 17, 2015. That's a 46% drop caused mostly by the fact that the company stayed in limbo for so long and then even after the FTC rejection continues to look for ways to push the merger through.

The FTC technically cannot stop the deal on its own, but it has sued to stop the deal on the grounds that the merger would reduce competition specifically when it comes to selling consumables (paper, pens, etc.) to large companies, That effectively ties the deal up in court for what could be a long time. Staples believes that the agency's analysis of the deal does not fairly look at the competitive marketplace the rival chains operate in.

Despite the competitive market it operates in, Staples may have hit bottom and going forward -- deal or no deal -- it could be ready for its comeback. Here are three reasons the office supply chain's stock may rise. 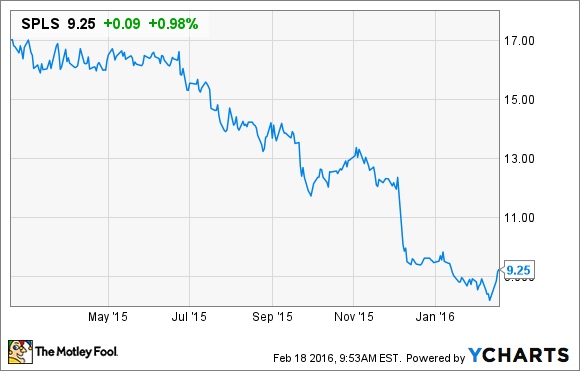 The FTC drops its opposition
Staples and Office Depot are not merely whining about the FTC getting in the way of their proposed merger. The two companies are also taking steps to shed assets in their corporate contracts segments because it's that area, not the mass consumer business, which may be the root of the federal agency's concerns.

The two companies have agreed to sell more than $550 million in large corporate contract business and related assets to Essendant, according to a press release. Essendant will pay Staples approximately $22.5 million for the contracts -- agreements for companies to buy certain quantities of various products. Ideally, this will placate the FTC because about half of the $550 million in contracted sales is from Fortune 500 companies (the so-called large corporations the federal agency is worried about not having enough choices).

Call it a blatant attempt to appease the FTC, but it might work because it takes a smaller player and makes it a competitor in the corporate contracts space.

If the FTC agrees, it might clear the path for the deal and unlock about $1 billion in savings for the combined company.

Staples gives up its pursuit of Office Depot
If the FTC decides that it won't support the merger, at some point Staples stock would benefit from the company simply accepting that decision and moving on. Just dropping the cloud of uncertainty and exiting the holding pattern the company has been in should give its share price a bump.

It's sort of a case of addition by subtraction. Staples clearly does not want to back away from the merger, but if it's going to lose, the company would benefit from ending the fight. If that happened, it would at least be able to redirect its resources to dealing with its present reality rather than a theoretical one.

The company is getting leaner
While the merger has dominated Staples' agenda for much of the last year, the company has also worked on making changes to allow it to operate more efficiently.

"We are streamlining the organization and building a simplified structure that will speed decision-making and enable us to focus on driving profitable growth," said Sargent, in a press release. "These changes will help us compete in a rapidly evolving marketplace, either as a stand-alone company or in combination with Office Depot."

The moves thin out the company's top executive ranks and give the remaining people more responsibility. That could lead to faster decisions and improve operations for the company around the world.

Perhaps the most important move is that Staples Europe President John Wilson will now oversee all international operations and take on the existing role of overseeing transformation companywide. Having one person lead that effort should give Staples the ability to better adapt to the market it operates in whether the merger happens or not.

Daniel Kline has no position in any stocks mentioned. He can't imagine why in the digital age anyone would consider Staples/Office Depot as a monopoly. The Motley Fool has no position in any of the stocks mentioned. Try any of our Foolish newsletter services free for 30 days. We Fools may not all hold the same opinions, but we all believe that considering a diverse range of insights makes us better investors. The Motley Fool has a disclosure policy.