An analyst downgrade and the departure of its several senior managers are sinking the Canadian miner’s stock today.

What: Shares of Teck Resources (TECK -0.79%) slumped more than 10% by 11:30 a.m. ET on Wednesday. That's after investors didn't like the news that several members of the company's senior management team were retiring and that the stock was downgraded by an analyst.

So what: Teck Resources announced the retirement of its COO and the senior vice presidents of its zinc and energy operations as well as the senior vice president of project development. All four had been in the resources industry for more than 30 years. That said, the timing suggests that this was more of a restructuring move, given that the company didn't name direct replacements but instead announced a reorganization of its management structure to "further align the organization to the current business environment," according to CEO Don Lindsay. This didn't sit well with investors because they don't like to see senior managers leaving a company, especially four in one day.

In addition to that, the stock is under pressure after being downgraded from sector perform to underperform by a National Bank analyst, who also lowered Teck's price target from $8 per share to $6.25. This downgrade, however, had more to do with Teck Resources' fierce run-up over the past month than any concerns with the company. As the chart below shows, the stock has skyrocketed since bottoming out in mid-January: 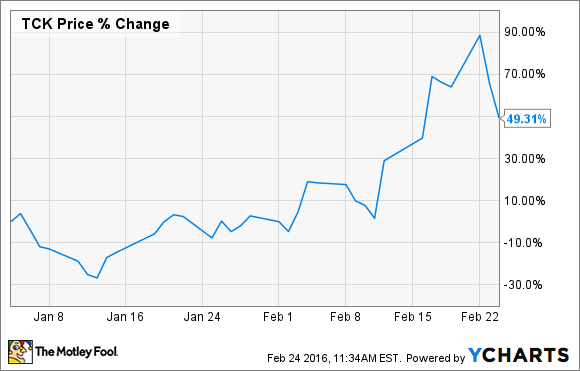 Now what: Teck is simply giving back some of its recent gains after investors took some profit. What's more important for investors to focus on isn't the stock's recent run or today's drop but its long-term outlook. That outlook is under pressure because the commodities Teck produces are also under stress. So, until there's a bit more long-term visibility on demand for commodities, investors can expect a very bumpy ride.