Please ensure Javascript is enabled for purposes of website accessibility
Log In Help Join The Motley Fool
Free Article Join Over 1 Million Premium Members And Get More In-Depth Stock Guidance and Research
By Adam Galas - Feb 24, 2016 at 7:04AM

Tallgrass Energy Partners' growth in 2015 was red hot. Here are three major warning signs that investors should watch for in 2016.

Collapsing energy prices have resulted in both an incredible long-term opportunity for income investors as well as a major challenge. With so many formerly beloved midstream MLPs' prices crashing, which pipeline operators represent incredible value? And which are cheap for a reason?

Take, for instance, Tallgrass Energy Partners (NYSE: TEP), and its general partner Tallgrass Energy GP (TGE), which has, up to now, posted spectacular growth that Wall Street seems to be ignoring completely. 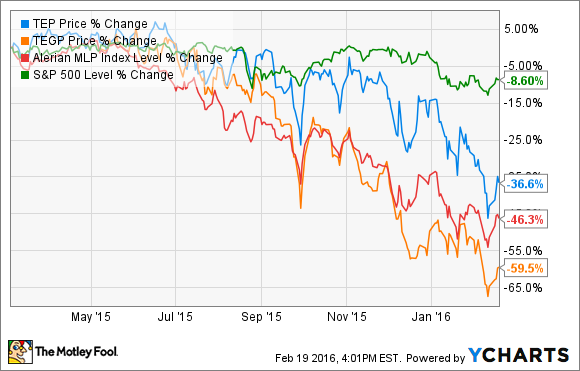 With Tallgrass Energy's 2015 results now in, let's look at why Wall Street might be so bearish on this MLP and its GP. More importantly,what are the risk factors dividend investors need to be aware of in 2016 that could make the difference between Tallgrass' proving incredibly undervalued or best to be avoided.

Spectacular 2015 seems to indicate market has lost its mind

Note that Tallgrass Energy GP derives all its cash flow from its ownership stake in its MLP and its incentive distribution rights meaning that its payout sustainability is linked to that of its MLP..

From a purely year-over-year basis, the market's sell-off of Tallgrass Energy Partners seems to make no sense. Thanks to major drop downs from its sponsor, the MLP achieved some of the best growth in the midstream MLP industry. Better yet, in the fourth quarter of 2015 Tallgrass Energy Partners completed its accretive acquisition of an additional 31.3% ownership stake in a major pipeline, the Pony Express.

According to President and CEO David G. Dehaemers Jr., the MLP has sufficient capital to avoid tapping debt or equity markets in 2016, which, combined with the additional DCF its larger ownership of Pony Express will provide this year, should allow for continued strong payout growth. Management expects this larger distribution to grow "at least 20% through 2017" and securely due to 95% of its 2016 projected cash flow being derived fee-based contracts.

Payout profile seems too good to be true

The first thing dividend lovers should look at for any midstream MLP is the distribution profile, which consists of the yield, long-term payout sustainability, and realistic long-term distribution growth prospects.

Again, it doesn't seem to make sense for the market to be valuing Tallgrass Energy Partners so cheaply, given management's optimistic outlook for the next year. Especially since 85% of Tallgrass Energy Partners' forecast adjusted EBITDA through the first half of 2016 is derived from "take or pay" contracts, which means the MLP has very low exposure to commodity price or volume risk.

Risks to watch for in 2016
First off, investors may have less confidence in high distribution growth guidance after what just happened to fellow midstream MLP MPLX (MPLX 1.42%). Citing worsening energy market conditions and the collapse of access to equity financing, MPLX management slashed its long-term payout growth guidance by 50%, from 25% per year through 2017, to just 12% to 15% per year.

Certainly a lack of cheap access to equity growth capital is a major concern for all midstream MLPs right now. However, with management stating that, unlike MPLX, whose leverage ratio (debt/EBITDA) is a high 4.7 that makes additional borrowing challenging, Tallgrass Energy Partners' much stronger balance sheet -- leverage ratio of 3.2 --should make borrowing growth capital in 2017 easier.

Thus the market may be signaling it believes that, should energy prices remain low through 2017, Tallgrass Energy Partners' weak access to equity growth capital might threaten its long-term growth plans.

Speaking of long-term growth, perhaps the biggest risk to this MLP is that its sponsor's dropdown pipeline is nearly tapped out. In fact, after this last acquisition of the Pony Express pipeline stake, Tallgrass Energy Partners has just a 50% stake in the REX pipeline system and a 20% stake in a Cushing, Okla., storage terminal left to purchase from its sponsor.

After that, only organic growth prospects will remain to continue growing DCF, which means that the MLP's super-fast growth days would likely have been numbered even without a crash in energy prices.

Bottom line
From an analysis of Tallgrass Energy Partners' 2015 results, 2016 guidance, and risk factors, it appears that the MLP and its GP are undervalued by Wall Street.

However, investors need to remember the risks facing Tallgrass Energy and keep in mind that, given its short growth runway and the current state of energy markets, future growth is likely to be far less impressive than in recent years.