Shares of open-source software-purveyor Red Hat (NYSE:RHT) have fallen more than 20% so far in 2016. Is this the beginning of the apocalypse for the inveterate Linux systems vendor? Not hardly. Here are three solid reasons why Red Hat shares could start rising again.

Yes, "again"
Excuse me for stating the obvious, but Red Hat's swooning share price is a very recent phenomenon. This plunge started from a freshly notched 15-year high, which was set right around the New Year. During the last 52 weeks, Red Hat has outperformed the S&P 500 market benchmark, albeit by a slim margin.

It's not like the stock is rising on fumes and fairy dust. This company can deliver the actual goods. Red Hat has not missed an earnings consensus target since 2012. Revenues have more than doubled during the last five years, while free cash flows soared 160% higher. Arch rivals Oracle (NYSE:ORCL) and Microsoft (NASDAQ:MSFT) can only dream about that kind of business growth: 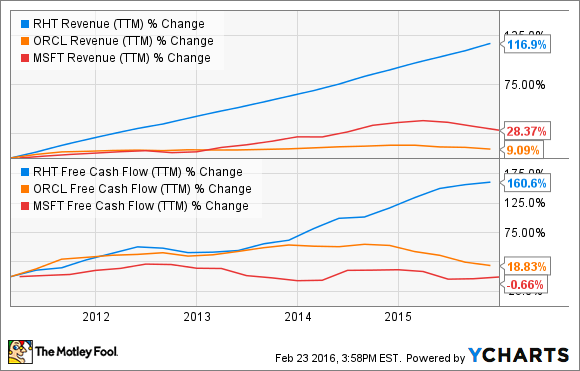 The larger software houses are trailing far behind Red Hat's growth rates. That might make sense for Oracle, which is fighting a surge of next-generation NoSQL database alternatives, and not finding much traction for its own NoSQL solution. But Microsoft is having a second wind under the refreshingly open-minded leadership of new CEO Satya Nadella. Redmond's shares have certainly soared in the last 12 months, even though trailing sales have fallen 10%, and earnings now run 14% lower.

Yet, while more than doubling its true business value, Red Hat's share price has only crept 53% higher. In short, Red Hat is building up a ton of unrealized shareholder value that's going unnoticed by Mr. Market. The profit-taking from historical highs must eventually end, and Red Hat shares have been spring-loaded for a very healthy bounce when that happens.

Earnings reports
In the meantime, market makers often respond to earnings reports. As I already mentioned, that happens to be an area where Red Hat shines.

During the last three years, the company has consistently outperformed Wall Street's expectations. The earnings surprises during these 12 quarters have all been positive, ranging from 3% to 20%. The average earnings surprise in this period was 8%.

The top-line story is similar. Revenue surprises ranged from 0.3% to 3.6%, with the average over delivery stopping at 1.3%.

Granted, these results don't always result in immediate share-price gains. In the fall of 2013, Red Hat beat earnings estimates by 6% on a 0.5% revenue surprise, and share prices fell 14% during the next few days. The stock held flat 12 months later despite an even more-substantial positive surprise. And share prices have barely moved on the last three earnings reports, even though Red Hat keeps delivering bottom-line earnings some $0.02 or $0.03 above Wall Street's estimates.

But other times, investors do get exited by this earnings juggernaut. Positive market reaction also included a 12% gain around the March, 2015 report. Three months before that, shares surged 18% on earnings enthusiasm. And in the winter of 2013, Red Hat investors used a quick 20% surge to lick their wounds after that disappointing September outing.

The next report is only a couple of weeks away. Chances are, it will move the stock. And since Red Hat pretty much always exceeds earnings expectations, I wouldn't be surprised to see share prices move up, as well.

The next big thing
Red Hat is carving out a nice security-focused niche for itself in the coming Internet of Things boom. On the data-center side, the company is a proven leader in the OpenStack cloud computing space. Though still a relatively small portion of Red Hat's quarterly sales, OpenStack has often provided the oomph to beat revenue targets in recent quarters.

Both of these next-generation computing platforms are small, but rising, pieces of the Red Hat puzzle today. Given their rapid growth and large long-term market opportunities, OpenStack and IoT can provide jet fuel for the long haul. On top of that, Red Hat is always looking for the next Next Big Thing.

With an army of developers in the open-source community at its side, augmenting the in-house professionals, Red Hat always has its finger on the community pulse. This company won't miss the next big wave.