I know what you're thinking. You thought this article would be another gloomy obituary detailing Apple's (NASDAQ:AAPL) declining tablet business. Not quite (although Apple's iPad business certainly has seen better days).

Apple has been widely expected to unveil an iPad Air 3 at its rumored March event, alongside a new 4-inch iPhone "5se." That would update the 9.7-inch model after Apple chose not to give the iPad Air 2 any love last fall. However, there is one notable change that we're now hearing about. 9to5Mac's Mark Gurman is now reporting that Apple's next 9.7-inch iPad won't be called the iPad Air 3 at all.

It'll be an iPad Pro
Instead, Apple is now reportedly going to release its new 9.7-inch tablet as part of the iPad Pro family, expanding the Pro moniker. This smaller Pro model will use a similar A9X processor, include more RAM like the 12.9-inch model, and adopt the same four-speaker stereo audio system. Significantly, the device will feature an updated display that can support Apple Pencil. The new tablet is also said to support Apple's Smart Keyboard, which implies that Apple has a smaller version of its keyboard cover ready, too.

The good news is that Apple is not expected to change pricing at all. Apple has stood pat by the $500 starting price for years.

Simple is better
Unlike what Apple seems to be doing with iPhone branding (making it needlessly complicated), this move makes a lot of sense since it would simplify the iPad branding. Instead of having three distinct families for Mini, Air, and Pro, this would consolidate the two more expensive products under the Pro umbrella. Apple could also justify this by saying only Pro models have stylus support for Apple Pencil, which Apple hopes will appeal to creative professionals. The current iPad Airs may still be sold at lower price points, but it looks as if they would eventually be phased out in favor of just the Mini and Pro.

Apple Pencil has been one of the most interesting new features of iPad Pro, even if the company was mostly following in the footsteps of rivals. Curiously, you might think that Apple would keep Apple Pencil support limited to the most expensive 12.9-inch Pro in order to drive unit sales and boost average selling prices (which have been declining for years following the introduction of the cheaper Mini lineup), but at the same time even the 9.7-inch iPad could use a sales uplift and broader Apple Pencil support could contribute. 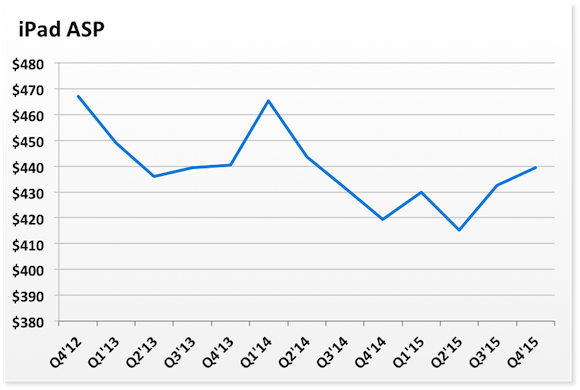