Please ensure Javascript is enabled for purposes of website accessibility
Log In Help Join The Motley Fool
Free Article Join Over 1 Million Premium Members And Get More In-Depth Stock Guidance and Research
By Travis Hoium – Feb 26, 2016 at 9:30AM

Las Vegas Sands has outperformed its nearest rival, but will those advantages last?

No matter how you slice it, Las Vegas Sands (LVS -2.62%) has outperformed Wynn Resorts (WYNN -2.05%) since the recession. Sheldon Adelson's company has made more money than Steve Wynn's, it's grown faster, and it's performed better on the stock market. Understanding why can give a peek into the future of the two gaming companies. 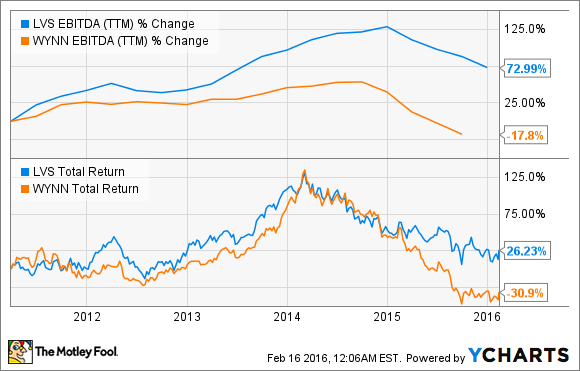 Diversity and growth pays off
Las Vegas Sands has been very aggressive building out capacity in Asia, which has been its biggest growth driver. Wynn Resorts opened Wynn Macau in 2006 and the Encore expansion in 2010, but hasn't opened any new properties since then.

After having Sands Macau (2004), Venetian Macau (2007), and Four Seasons Macau (2008), Las Vegas Sands opened the massive Marina Bay Sands in Singapore in 2010 and Sands Cotai Central in 2012, bringing the company's total number of resorts in Asia to five. This capacity helped Las Vegas Sands grow quickly as Macau's gaming revenue nearly tripled between 2009 and 2014. Singapore, where Las Vegas Sands owns one of only two resorts, has even become the company's largest cash flow generator.

Will the tables turn in 2016?
What's changing in 2016 is the construction of two new resorts, one from each company. Wynn Palace will open this summer and will double the company's presence in Asia. The Parisian, from Las Vegas Sands, is expected late in the year and will have a far less meaningful impact on the company's operations, at least on a percentage basis.

Wynn Resorts isn't ever going to build as aggressively as Las Vegas Sands might; it's just not Steve Wynn's way. But with the addition of a single resort the company could increase revenue and earnings by well over 50%. That could make it a steal compared to Las Vegas Sands for investors. 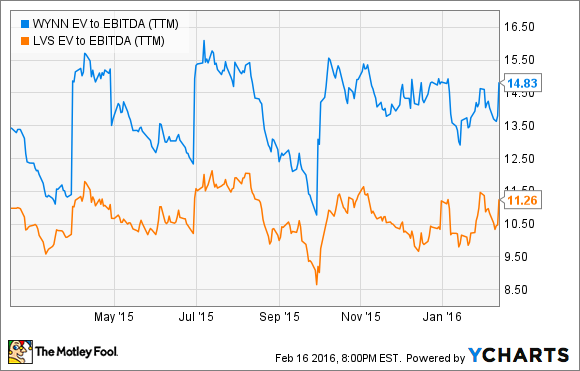 Will the tables turn between these two gaming giants?
Las Vegas Sands' strategy has definitely been very successful as gaming in Asia has expanded. And the drop in VIPs affected it less than others. But the tables may be turning for investors with companies like Wynn Resorts expanding from a smaller base. That could lead to better performance as Las Vegas Sands' days of massive growth move further in the rearview mirror.