After losing nearly a third of its annual sales volume and 80% of its market cap in the span of two years, J.C. Penney (OTC:JCPN.Q) returned to sales growth in late 2013. However, the stock has remained mired below $10. 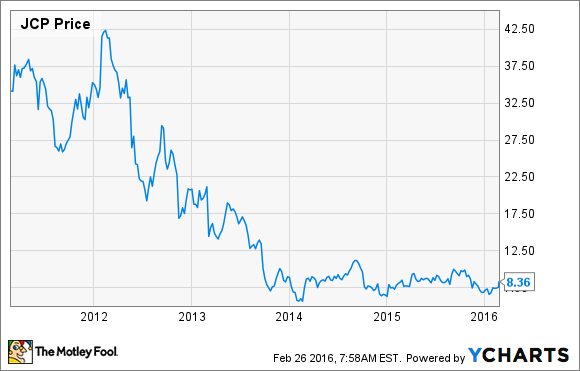 J.C. Penney's fourth-quarter results and 2016 outlook show that its turnaround may have hit an inflection point, though. This puts it on track to earn its first annual adjusted profit in five years during 2016.

J.C. Penney's gross margin expansion was particularly impressive. Competitors like Macy's (NYSE:M) had too much inventory last quarter and were forced to offer big discounts to clear unwanted merchandise. Given that J.C. Penney generally caters to more price-sensitive customers than Macy's, it's remarkable that it was able to fully offset the competitive pricing pressure.

J.C. Penney also posted solid full-year improvements in revenue, comp store sales, gross margin, operating expenses, and adjusted EPS. Most important, free cash flow more than doubled for the full year -- albeit from a low base -- allowing J.C. Penney to pay down some of its massive debt load.

Looking ahead
J.C. Penney expects to post further performance improvements in 2016. The company projects that comp sales will rise 3% to 4% this year, while SG&A expenses will continue to fall.

Furthermore, J.C. Penney expects another 40 to 60 basis points of gross margin expansion. Some of this could come from a better product mix -- particularly growth in J.C. Penney's private-label brands. It will also benefit if competitors like Macy's get their inventory under control, reducing industrywide pricing pressure.

As a result, J.C. Penney believes that it will earn a positive full-year adjusted profit for the first time since 2011. Meanwhile, its all-important free cash flow should improve once again, allowing J.C. Penney to continue paying down debt.

Based on J.C. Penney's strong Q4 performance and this stellar outlook for 2016, it's no surprise that investors are starting to gain confidence in the company's turnaround.

J.C. Penney stock had already risen more than 20% in the month leading up to its earnings report, rebounding from the early 2016 sell-off that affected most of the market. On Friday morning, the stock gained another 9% as of 10 a.m. ET. If J.C. Penney can maintain its recent momentum, there will be plenty more upside in the coming years.